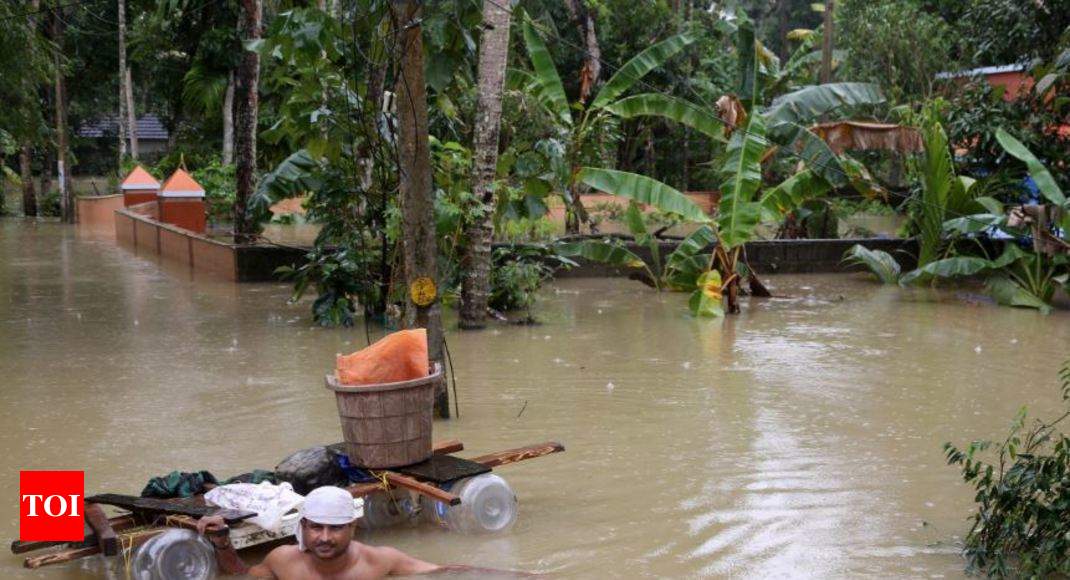 NEW DELHI: The National Disaster Management Authority (NDMA) on Sunday said there will be no heavy rains in the flood-hit Kerala + for the next four days, giving a ray of hope to the distraught people of the state.

The NDMA also said more than 33,000 people have been rescued by different agencies from the flood-affected areas of the state. Over 6.33 lakh people are currently staying in relief camps, it added.

“Rainfall will further decrease during the next five days. Heavy rain at one or two places in Idukki, Konnur and Kozhikode districts likely on Sunday. No heavy rain from tomorrow for the next four days,” the NDMA said quoting a bulletin of the India Meteorological Department (IMD).

There is no red or amber colour code warning for any district of Kerala today. A yellow warning has been issued in three districts.

The IMD has four colour codes to signify the intensity of weather. Red means authorities need to take action and one could expect extreme weather conditions, amber means government agencies need to be prepared to handle exigencies. Yellow colour code means situation needs to be watched, while green signals the weather would be normal.

The central government has also decided to give ex-gratia of Rs 2 lakh each to the family of those killed in the floods and Rs 50,000 to the injured.

The compensation will be provided from the Prime Minister’s Relief Fund.

So far 129 metric tonnes of rice and 30 MT milk powder (20 MT to Idukki and 10 MT to Wayanad) have been dispatched to Kerala, it said.

The Tamil Nadu Medical Services Corporation has dispatched necessary medicines to the affected areas, which is in addition to more than 150 truck loads of relief materials from the civil society and NGOs.

Altogether 100 tonnes of food materials like biscuits, rusks and drinking water are being airlifted to Kerala from Jalandhar and Patiala in Punjab.

At least 197 people have been killed in Kerala in the last 10 days in the second spell of monsoon fury since August 8 as floods and landslides triggered by incessant rain have wreaked havoc in many parts of the state.