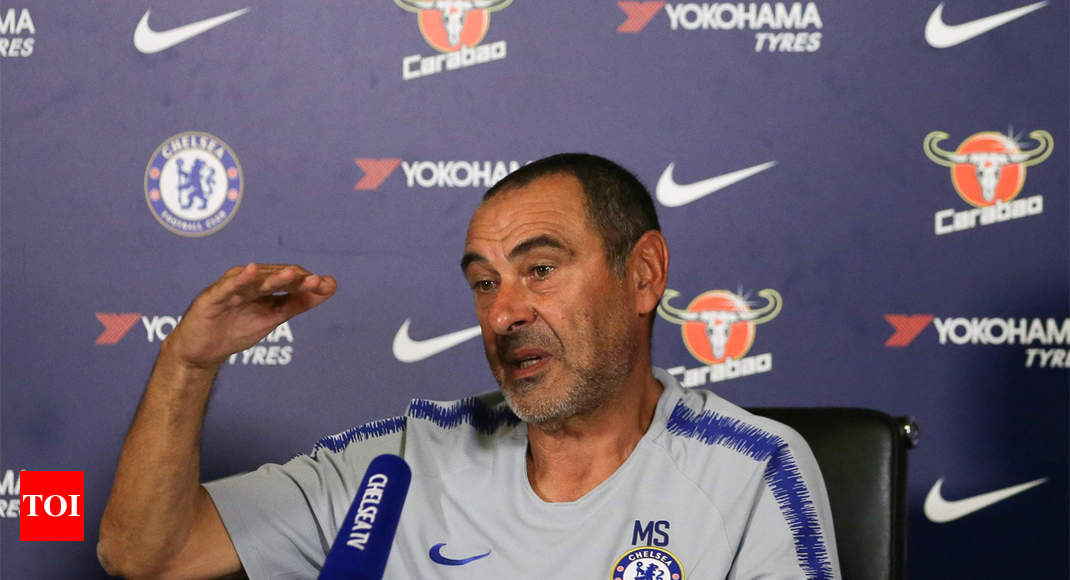 LONDON: Maurizio Sarri has only had his feet under the table at Chelsea for three weeks, and yet the Italian already has his heart set on an extended stay at Stamford Bridge. Ahead of Sunday’s Community Shield match against Manchester City, Sarri declared his intentions to remain at the club “for ten years,” while revealing the role Pep Guardiola played in convincing him to move to England.

Sarri is nothing if not ambitious. Of Chelsea’s last seven managers, only Jose Mourinho has lasted longer than two seasons. And the last manager to enjoy a decade at the club? That would be Scotsman Billy Birrell, who was appointed a few months before the Second World War broke out. And yet Sarri – whose longest spell in charge of a club was at Napoli, where he stayed for the grand total of three campaigns before Chelsea came calling – is aiming big. He signed a three-year deal at Chelsea when he agreed to replace Antonio Conte but is already planning on staying in south-west London for far longer. “It depends on the club,” the Italian replied when asked how long he envisaged lasting in his new position. “I want to stay here for ten years, although I know I have to win.”

How long Sarri is given at Chelsea largely depends on how many trophies he can collect, with Roman Abramovich desperate to see the club back in the title mix after a disappointing campaign under Conte last season. Winning the Community Shield would then represent an encouraging start for Sarri – who is yet to lift a notable trophy – although Guardiola’s City will start the match as favourites. “It’s important to start with a trophy,” Sarri agreed at Chelsea’s training ground on Friday.

Ironically, if it wasn’t for Guardiola, who Sarri describes as “the best coach in the world”, the Italian may never have ended up at Chelsea. Sarri said he had sought the Catalan’s counsel ahead of agreeing to a move to EPL. The likes of Eden Hazard, Thibaut Courtois and Willian will all be absent.

A QUESTION OF CONFIDENCE?

Despite reservations from fans, Alvaro Morata is refocused while Olivier Giroud is set to reject interest from Marseille and continue the positive impression made since his arrival in January. In a 4-3-3 formation, the pace of Pedro, the return to fitness of Ross Barkley and the creative flair of Cesc Fabregas saw the FA Cup winners dominate Arsenal at Dublin’s Aviva Stadium. New signing Jorginho has already established himself as a leader. With N’Golo Kante alongside him, Chelsea will have some midfield. Chelsea’s supporting cast shaped up well enough to provide hope it may simply be a question of confidence.