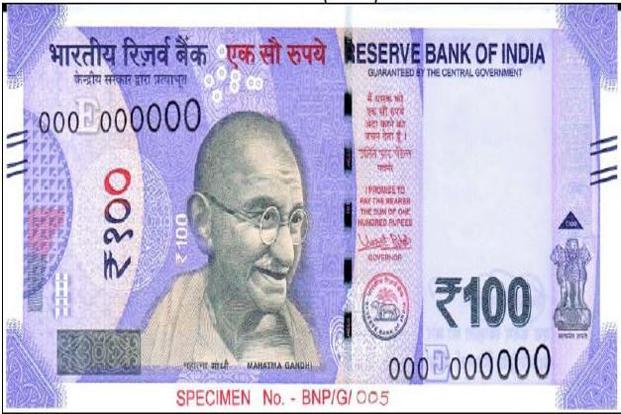 Front side of the new Rs 100 denomination currency note which will soon be issued by RBI.

New Delhi: Paying tribute to India’s rich cultural heritage, Rs 100 currency notes will soon come in a new design and a fresh lavender colour. The Reserve Bank of India (RBI) today announced that the new Rs 100 denomination currency note will soon be made available at banks. Part of the Mahatma Gandhi (New) Series of banknotes, the new denomination prominently carries the motif of ‘Rani-Ki-Vav’ (The Queen’s Stepwell), a UNESCO World Heritage site in Gujarat.

All banknotes in the denomination of Rs 100 issued by the RBI in the earlier series will continue to be legal tender. As is normal, when a new design of banknote is introduced, printing and supply of these notes for distribution to public through the banking channel will gradually increase, says RBI. 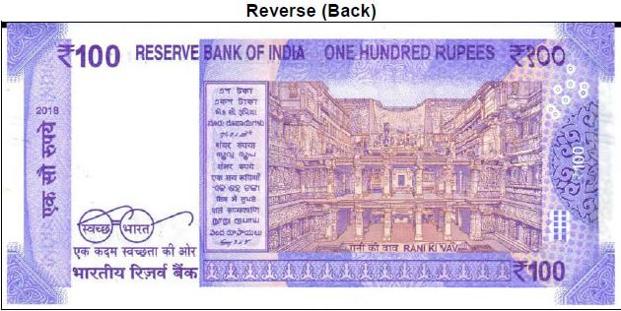 Back side of the new Rs 100 currency note.

Here are some interesting features about the new Rs 100 note:

The new Rs 100 note features a windowed security thread with inscriptions ‘Bharat’ in Hindi and RBI with colour shift on the front side. Colour of the thread also changes from green to blue when the note is tilted.

The back side of the note displays a photograph of ‘Rani-ki-Vav (the Queen’s Stepwell). Located at Patan in Gujarat, the heritage site was initially built as a memorial to a king in the 11th century AD.

For visually-impaired, the note has intaglio or raised printing of Mahatma Gandhi portrait, Ashoka Pillar emblem, raised triangular identification mark with micro-text 100, four angular bleed lines both on the right and left sides.

RBI to issue new Rs 100 notes in #lavender colour; the new denomination will have the motif of ‘Rani ki vav” – a stepwell located on the banks of Saraswati river in Gujarat”s Patan.
All Rs 100 banknotes issued earlier will also continue to be legal tender pic.twitter.com/ePNWddkoQL

The note features a Mahatma Gandhi portrait and electrotype (100) watermarks.

On the front side, the currency note has a see through register with denominational numeral 100.

The denomination numeral 100 is written in both Hindi and Devnagari with a portrait of Mahatma Gandhi at the centre.