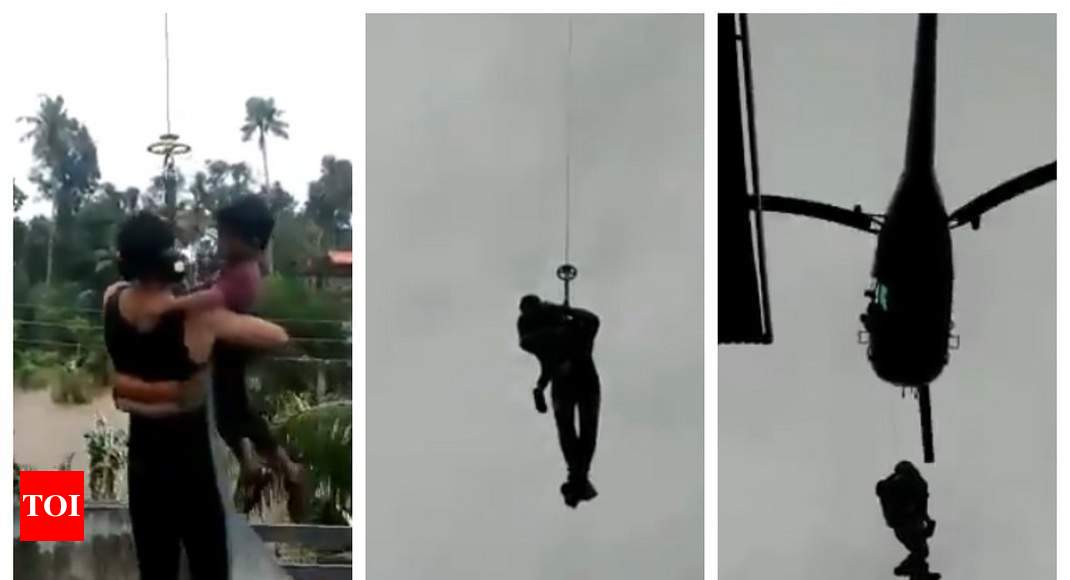 NEW DELHI: Indian Navy choppers have been involved in some of the most daring rescue operations in flood-hit Kerala in the last few days. Choppers have been used to airlift stranded people whose houses are on the verge of getting submerged by flood waters.

A pregnant lady was successfully operated after she was airlifted by a Navy helicopter after her water broke.

A pregnant lady with water bag leaking has been airlifted and evacuated to Sanjivani. Doctor was lowered to asses… https://t.co/OhyRJz4cTN

These videos of rescue operations have highlighted the intricacies and complexities of the task present in front of the rescue agencies.

The video, which is being widely shared on social media, was posted the official Twitter handle of the Indian Navy.

In the video, flight diver Amit can be seen rescuing a child as he is hoisted by a chopper from the roof of what appears to be a house. The helicopter was being commanded by Cdr Vijay Verma.

The navy diver was hailed as a “hero” by the online community.

“Proud of you, Vijay and Amit! May God be with you always!” a Twitter user responded to the Indian Navy’s video.

Another user thanked the forces for their prompt rescue effort.

“Kudos to our armed forces. Only God knows what would happen had they not been around,” he tweeted.

Rescue and relief teams from Army, Navy and Air Force, along with NDRF teams, have been working round-the-clock to provide assistance to the flood-affected people in Kerala where as many as 164 people have lost their lives.

Army, Navy, Air Force and NDRF personnel have begun rescuing people stranded in the worst affected areas of Ernakulam, Pathanamthitta and Thrissur districts from this morning.

The rescue teams have rescued many elderly persons and women with young children this morning.