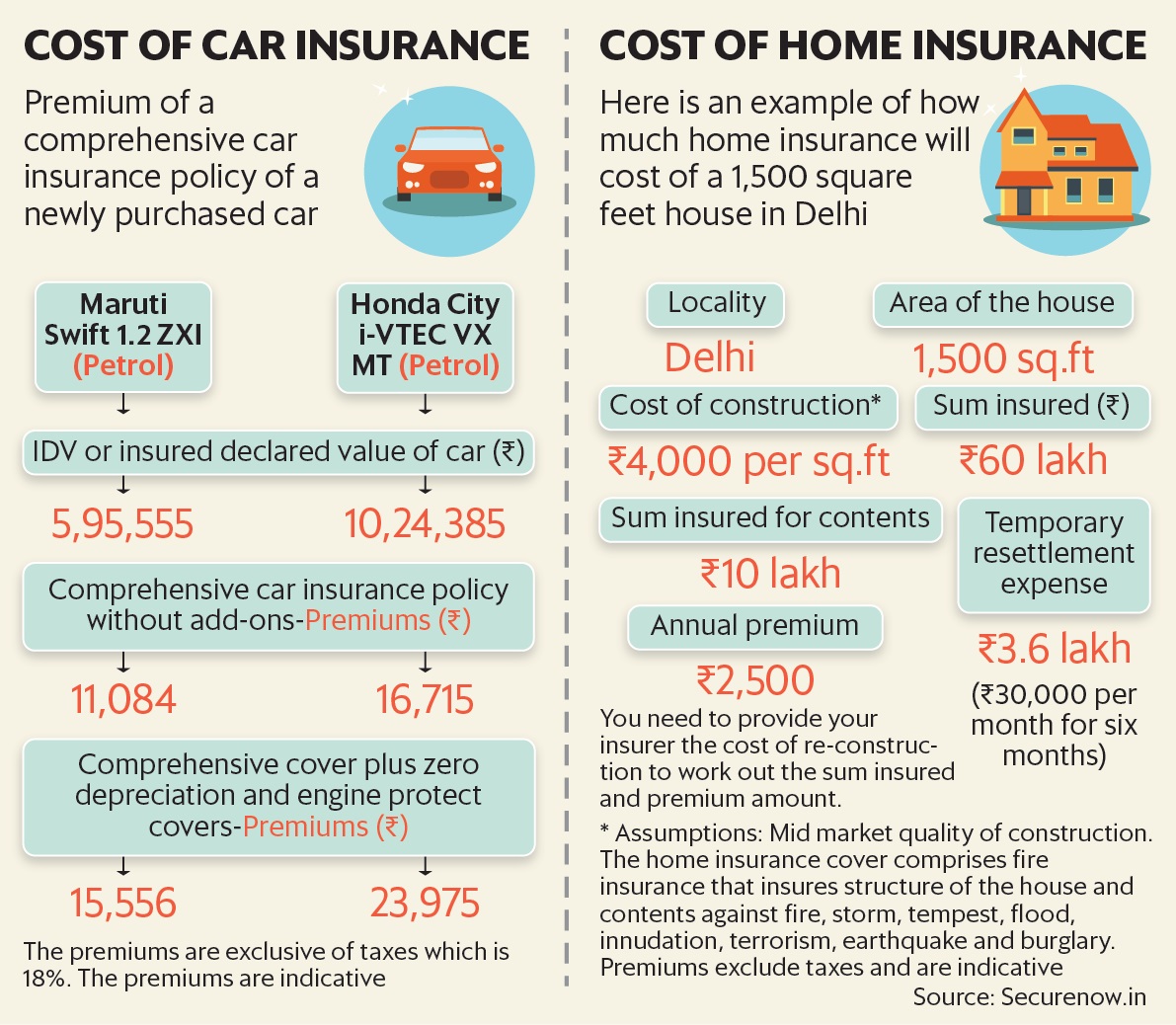 Earlier this week, heavy monsoon showers caused substantial damage in Mumbai, with roads caving in some parts of the city. According to media reports, around 15 cars got damaged when the compound wall and internal road of Lloyd’s Estate, a housing society in Wadala, caved in. Residents were also asked to evacuate the society temporarily for authorities to inspect the building. Though the temporary evacuation is sure to upset the residents’ lifestyle for a while, they have some recourse in insurance for the losses they might have suffered as far as damages to vehicles are concerned. Others can gear up to bear the brunt of monsoon showers by buying the right car and home insurance policies.

Damage to your car

Floods are bad news for vehicle owners. If water gets inside the car, it can damage the interiors or worse the car engine. “The own damage cover of a car insurance policy will pay for any damage to upholstery or built-in electronics of the car like the stereo system, but if there are add-ons like the policyholder has installed a high-end stereo instead of a built-in stereo, it will have to be declared and insured by paying extra premium,”said Sanjay Datta, chief underwriting and claims, ICICI Lombard General Insurance Co. Ltd.

For affected Mumbai residents, though, car damage also occurred due to landslide and roads caving in but they can make a claim. “Damage to vehicles in this case is accidental and hence insured. The policyholder needs to inform the insurer as soon as possible. The car will have to be pulled out of the debris, towed to the workshop which will then assess the repair cost,” said Sasikumar Adidamu, chief technical officer, Bajaj Allianz General Insurance Co. Ltd.

“In case the repair cost is more than the insured declared value (IDV), it will be seen as total loss and the entire IDV will be paid to the customer,” he added. The value of your car depreciates each year and IDV is the sum insured that’s calculated based on the invoice of your car minus depreciation. However, there are certain items that the insurer will not pay for.

It gets tricky when driving on a flooded road damages the car engine. If the vehicle is flooded and you continue to drive or start the engine, the water gets sucked into the engine and damages it. So, when you see water levels reach the middle of the wheel, don’t attempt to start or drive your car. If you do, any damage to the engine will not be considered accidental but consequential damage which isn’t paid by the insurer.

To cover consequential loss to engine add-on covers engine protect or engine secure can help. But the insurer will deduct depreciation while paying the claim. A zero-depreciation add-on cover will work here.

Damage to your house

Heavy rains and floods can also cause considerable damage to your house and home insurance helps as it covers the structure as well as the contents of the house. “Home insurance packs in fire insurance and insurance against burglary. Fire insurance covers the building and the contents against 12 perils, including storm, tempest, inundation and flood. So if your house is damaged due to a landslide caused by floods you can claim insurance,” said Kapil Mehta, co-founder, SecureNow Insurance Brokers Pvt. Ltd.

It also packs in covers against mechanical or electrical breakdown. Other covers include public liability cover (compensates a third party for losses caused by you), personal accident cover (offers insurance on account of accidental death or total permanent and partial disability due to an accident) and alternate rent cover that pays rentals for the period your house is under repairs due to damages.

However for the residents of Lloyd’s Estate, home insurance will be of little use as there is no damage to the building. “The fire brigade evacuated the residents to ensure their safety. Even if the residents had taken alternate rent cover under the fire insurance policy, since there is no damage to the building from an insured cause, the rent incurred by shifted residents will not be payable by policies,” said K.G. Krishnamoorthy Rao, managing director and chief executive officer, Future Generali India Insurance Co. Ltd.

But in the case of an actual damage, home insurance helps and so it’s important to understand the basics. Go for a policy on a reinstatement basis and make sure you don’t underinsure yourself. If you live in a building then you could also look at policies that work on the concept of “agreed value” basis. In the event of a loss, you get the agreed value and the ownership of your house is transferred to the insurer.