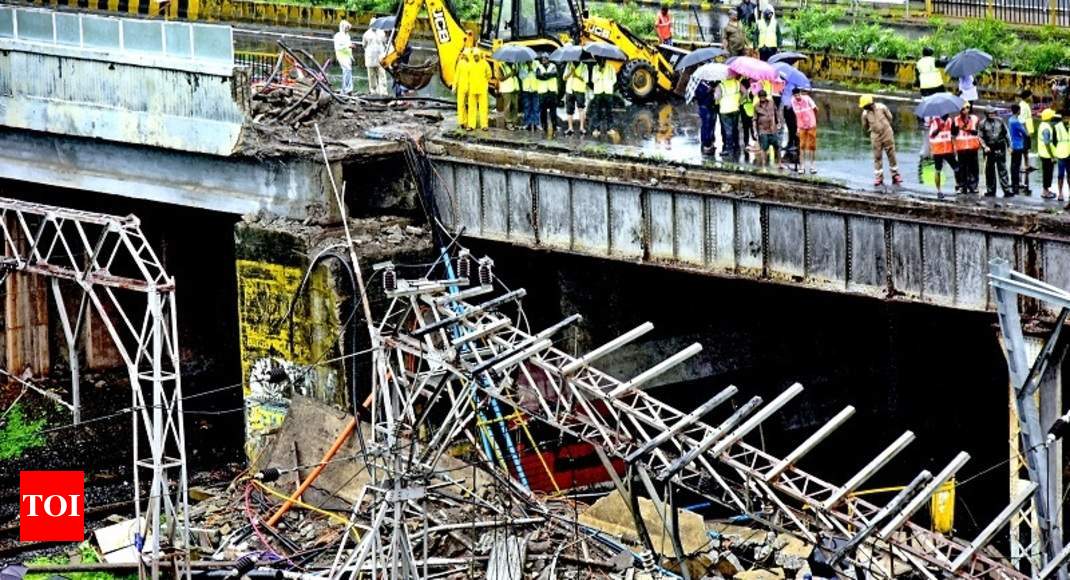 MUMBAI: Barely nine months after the Elphinstone Road stampede that killed 23 people, a portion of the 40-year-old Gokhale Road over-bridge in Andheri crashed on to railway platforms No. 8 and 9 Tuesday morning amid heavy rain across the city. Five persons were injured, three of whom — including a woman — were on the bridge and two on the platform below.

While the woman, Asmita Katkar (35)was critical and battling for life at a hospital, a chartered accountant, Manoj Mehta (52) suffered injuries to his spine and had to undergo a surgery at Nanavati Hospital. The other three injured were at Cooper Hospital and were out of danger.

It was luck that prevented loss of life despite Western Railway being a very busy suburban corridor with a less-than-four-minute train frequency. No train was passing underneath, the crowd on the bridge and platform wasn’t too sizeable, and motorman Chandrashekhar Sawant, on spotting the debris, applied emergency brakes and halted a local in time to avert a bigger disaster.

Calling the incident unfortunate, railway minister Piyush Goyal has ordered an inquiry by the commissioner of railway safety, who will submit a report in 15 days.

“I saw the design of the bridge and studied the drawings and saw it was a 40-year-old bridge, a cantilever bridge, and because of it being on cantilever it collapsed.”

“Motorman Chandrashekar Sawant acted quickly and halted the train. We have decided to award him Rs5 lakh.

The injured will be given Rs 1 lakh each,” Goyal said, adding that around 500 railway staffers were working on restoring services.