Prime Minister Narendra Modi will inaugurate the Statue of Unity in Surat, Gujarat today at around 11:30 am.

The Statue of Unity is built in dedication to Iron Man Sardar Vallabhbhai Patel, who served as the first home minister of independent India.

Sardar Patel is credited with uniting all 562 princely states in pre-independent India to build the Republic of India — hence the name of the statue.

The date for the inauguration of the statue (October 31, 2018) also marks the 143rd birth anniversary of Sardar Patel.

on October 31, 2018Comments Off on Modi unveils Sardar Vallabhbhai Patel’s statue in Gujarat 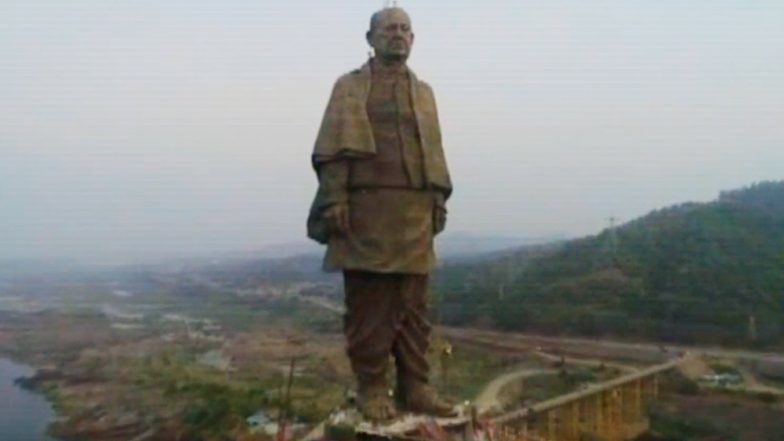 believed to be the tallest in the world, and  it will be a reminder about the courage of a man who thwarted efforts to disintegrate India.

Had Sardar Patel not united the country, we would need visas to see lions or pay homage at Somnath or view the Charminar in Hyderabad,

He added that the statue will remind those who question India’s existence that this nation was, is and will remain eternal.

He described the Statue of Unity as a symbol of the country’s engineering and technical capabilities.

The imposing monument is twice the height of the Statue of Liberty in the US and is built on an islet, Sadhu Bet,

near the Sardar Sarovar Dam in Gujarat’s Narmada district.

which was used for the outer cladding of the structure.

A viewing gallery has been created at a height of 135 metres inside the statue to enable tourists to have a view of the dam and nearby mountain ranges.

if Patel had not united the country, the countrymen would have needed visas to see lions in Junagadh or

pay homage at” Somnath in Gujarat” or

view the” Charminar in Hyderabad”.

The Prime Minister  said that Patel had a mix of diplomatic skills of Kautilya, a statesman and philosopher, and

the valour of warrior King Shivaji in him.

Modi described the ‘Statue of Unity’ as a symbol of the country’s engineering and technical capabilities.

Modi said his government is treading the path shown by Sardar Patel.

we have united the country economically by bringing in GST,” the PM said.