NEW DELHI: With the Kerala flood toll rising and 3.5 lakh staying in relief camps, Prime Minister Narendra Modi on Friday said that rescuing trapped people is the “top-most” priority and announced an additional Rs 500 crore in aid, even as he lauded the fighting spirit of Keralites.

Modi undertook an aerial survey of flood affected districts along with Kerala CM Pinarayi Vijayan, governor P Sathasivam and Union minister K J Alphons. In a series of tweets, the PM said, “I salute the people of Kerala for their fighting spirit… the nation stands firmly with Kerala”.

He announced the financial assistance in addition to Rs 100 crore spoken for by home minister Rajnath Singh on August 12 and Rs 2 lakh ex-gratia per person to the kin of deceased and Rs 50,000 for seriously injured from PM relief fund. He also assured that relief materials, including foodgrains and medicines would be provided. 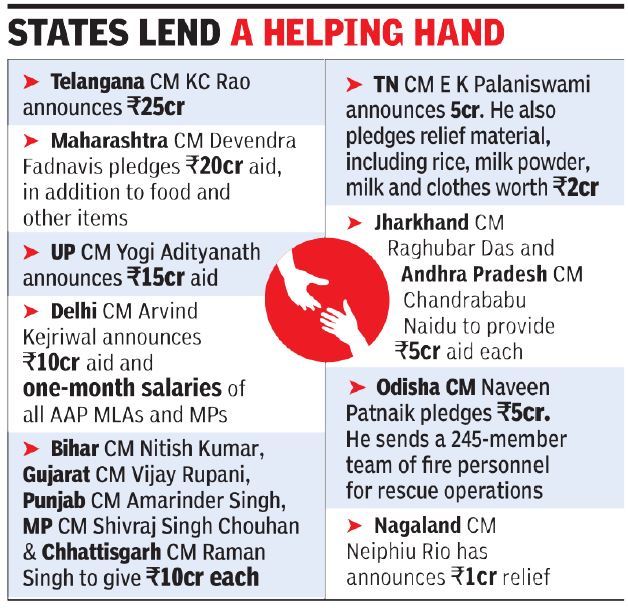 The National Crisis Management Committee, chaired by the cabinet secretary, held its third review meeting here on Saturday and spoke to the chief secretary of Kerala and instructed further deployment of forces and relief materials in the affected areas of the state as required.

“On the instructions of PM Modi, 67 helicopters, 24 aircraft, 548 motorboats and thousands of rescue personnel from Indian Navy, Army, Air Force, NDRF, Coast Guard, other CAPFs, have been pressed into service to rescue and evacuate people from submerged areas to relief camps and for distribution of relief materials,” a press note from the home ministry said.

The department of telecom has enabled intra-circle roaming which will enable subscribers of one service provider to access mobile towers of other service providers. All the operators have offered free data and SMS facility from Friday.

The PM has also directed insurance companies to hold camps for timely release of compensation to the affected families/beneficiaries under social security schemes. The directions have also been issued for early clearance of claims under Fasal Bima Yojna to agriculturists, said officials.

NHAI has been asked to repair main national highways on priority while NTPC and PGCIL (power grid corporation of India ltd) have been asked to help the state government in restoring power lines.

The government has also decided that villagers, whose kutcha houses have been destroyed, would be provided Pradhan Mantri Awas Yojana-Gramin houses irrespective of their priority in the permanent wait list of PMAY-G.

Railways offered to run a special food and medicine train from Thiruvananthapuram to Ernakulam.