Prime Minister Narendra Modi has been holding a series of interactions with beneficiaries of various welfare programmes initiated by the Centre across the country in recent weeks in a bid to stop state governments from appropriating these schemes, ahead of the general elections.
The prime minister has used the NaMo App to interact with the beneficiaries of schemes such as Ujjwala yojana to increase LPG cylinder coverage, Mudra yojana to finance small and micro entrepreneurs, and Aushadi yojana for distributing affordable generic drugs, sending across a message about the achievements of his dispensation in the last four years.
The need to propagate these schemes and to underline that these have been initiated by the Centre and are primarily funded by it is due to the appropriation of many schemes by state governments as their own, BJP insiders said. Since development is a major plank on which BJP plans to go to the people in the 2019 elections, it is important that the party’s political opponents do not make political capital out of it, they said. 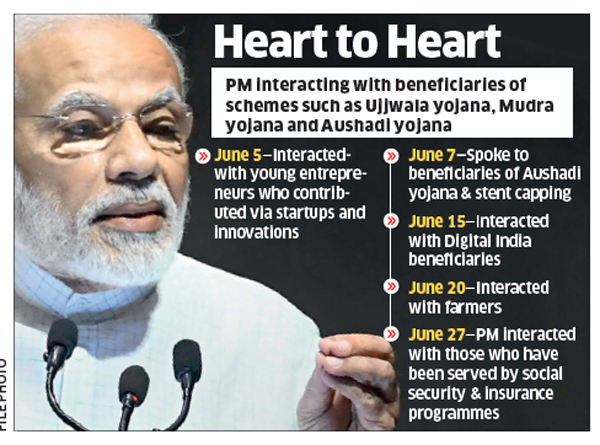 The first such reach out was on May 28 when he talked to those who have gained from the Ujjwala yojana. Most the people who interacted with him were women who apprised him of the issues faced by them and how the delivery of LPG cylinders has helped them.This was followed by an interaction with Mudra beneficiaries on May 29 through video conferencing to know from the people how the loans had helped them set up their business and helped in creating employment.

On June 5, Modi held an interaction with young entrepreneurs who had made a contribution through startups and innovations. On June 7, the prime minister talked to those aged people who had benefited from the Aushadi yojana and stent capping. He interacted with Digital India beneficiaries on June 15, followed by an interaction with farmers and others involved in agriculture on June 20. Modi’s latest reach-out through the NaMo App was on June 27 when he interacted with those who were served by social security and insurance programmes. The prime minister’s recent speeches — be it at a programme in Indore on June 23 to give away awards for Swachh Bharat or his remarks at Sant Kabirnagar in Uttar Pradesh on Friday — have also mostly dwelt on the welfare programmes of his government.

Modi has asked all his Union ministers and party MPs from both Houses to educate people, especially the backward and weaker sections, about how the Centre is working for their welfare. He has led this campaign by not letting go of any opportunity to emphasise what these measures are and how the Centre is committed to serving the poor. With BJP/NDA being in power in 20 states, the fear of other parties calling the welfare schemes their own is not much, but there is a concern that the fallout of sloppy implementation would be on the Modi dispensation.