Mehul Choksi can be extradited under Commonwealth laws: Antigua to India | INDIA
Categorized as
142
Tagged as
ChoksiMehul Choksi
Related

Antigua and Barbuda has informed India that in the absence of a bilateral treaty, Mehul Choksi can still be extradited to New Delhi as both countries are members of the Commonwealth of Nations.
The Antigua and Barbuda government is of the view that Section 7 of its Extradition Act, 1993, provides scope for acting on New Delhi’s request to send back the jeweller, ET has learnt.

The view of the A&B government was shared with the Indian envoy when he called on the country’s foreign minister EP Chet Greene and solicitor general Martin Camacho recently.

The CBI has already initiated the process to extradite the fugitive businessman from Antigua and Barbuda. CBI sent the request under the UN Convention against Corruption as both countries are part of the convention.

The UN convention is the only legally binding universal anti-corruption instrument. It covers five main areas — preventive measures, criminalisation and law enforcement, international cooperation, asset recovery, technical assistance and information exchange. It also covers bribery, trading in influence, abuse of functions and various acts of dubious deals in the private sector. Choksi, who now has a citizenship of Antigua, fled from India on January 4. 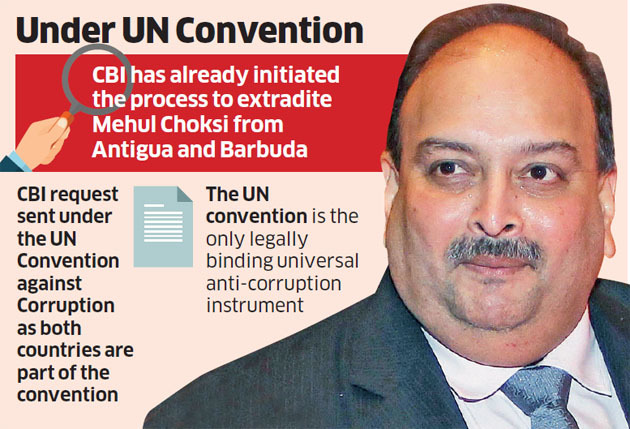 He was in the US till July 7, but before the agencies could begin the process of bringing him back, he fled to Antigua.

Choksi is accused of colluding with his nephew and billionaire jeweller Nirav Modi to defraud the Punjab National Bank. Though the passport issued to him by the Indian government was revoked in February 2018, it recently came to light that Antigua and Barbuda had granted him citizenship in November 2017 itself.

He has moved the court in St John’s even as India stepped up pressure on Antigua and Barbuda to detain him and prevent him from travelling out of the country. Choksi has urged the A&B high court to bar the government from detaining him for extradition. He moved the court last Monday. In a petition, Choksi argued he had been granted citizenship in accordance with Section 119.1 of its Constitution.

The Mumbai Police on Saturday said they gave a “clear report” to Choksi last year as no criminal antecedents were found against him. Police also said they have ordered an inquiry “into the matter of issuance of police verification report” to Choksi when he obtained the passport in 2015.