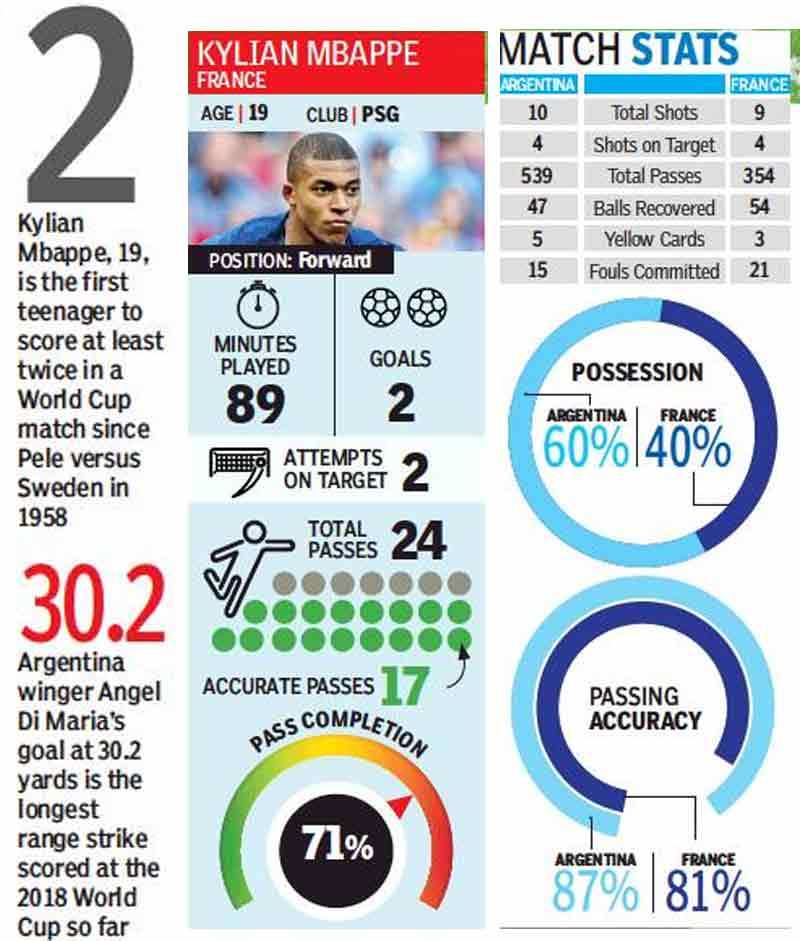 KAZAN: All you could hear after 68 minutes in the Argentina-France clash inside the Kazan Stadium here on Saturday was the loud, lusty singing of the La Marseillaise.

Kylian Mbappe had scored his second and France’s fourth, yes fourth, against Lionel Messi’s Argentina in the World Cup pre-quarterfinal in this iconic city, south-west of Moscow.

It was broad daylight but the sun had set on Messi and Argentina, knackered by the pace of Mbappe and the slick passing style of Antoinne Griezmann, Olivier Giroud, Paul Pogba and N’Golo Kante.

The rise of a new vibrant France sparked the end of the Lionel Messi era. Diego Maradona will not enjoy the best seat in the house anymore and neither will his cheerleading skills be called upon, at least for four more years.

Saving a few tear drops for Messi, one must celebrate the expansive, heart-warming, adjective-draining game that Didier Deschamps’ men played. It was a grand performance, in front of an eclectic gathering on the highest stage.

For 90 minutes, more so in the second 45, France played as if to show the 46,000 inside the stadium what the expression ‘joie de vivre’ means.

France fell in love today with the free spirit of a young 19-year old. Mbappe’s first run earned France a freekick. Griezmann sent shivers down the Argentine spine, thundering the horizontal. His second run, even longer than the first, earned France a penalty. The clock showed it was not even 15 minutes into the game and Javier Mascherano, Nicolas Otamendi and Marcus Rojo were looking for extra oxygen cylinders. Rojo pulled Mbappe down and Griezmann converted the penalty.

Forewarned is not always forearmed, as Argentina realised they were ill-equipped to handle the pace of the Paris St Germain winger. His style is simple and beautiful.

Stunned, Argentina hit back through Angel Di Maria who burnt a hole into Hugo Lloris’ net with a blinding left-footer from outside the box. The distance, 30 yards from the goal, was the longest so far in this World Cup. The stadium came alive and so did Maradona – the self-proclaimed rebel – in the executive box.

Returning from the dressing room, Argentina went ahead with a somewhat lucky strike from a corner. The ball found Messi at the far end and he fired a hopeful shot even though Pogba was blocking him. The shot eluded Pogba but found Gabriel Mercado’s outstretched leg to wrong-foot Lloris.

France stayed calm. Kante went on with his collecting and ball-spraying job. Pretty moves started flowing on the pitch. From one such fluid move, France levelled. Left-full back Lucas Hernandez sent in a cross from deep into Argentina’s half. The ball found its way to the far corner where right back Benjamin Pavard arrived to volley it into Franco Armani’s net, past his flailing hands. Even a child doesn’t dream of such a goal.

The next two, in the 64th and 68th, were stuff of Mbappe’s dreams. He first twisted past Federico Fazio to put France in the lead once again. Four minutes on, Mbappe had the world in a thrall. Giroud’s pass found the youngster who breezed in to meet the ball, his new best friend, with a sweet connection. The contest had been put beyond the point of no return.

Messi, admiring helplessly the unveiling of a new star, perhaps felt like giving his last critical performance. To leave his final mark on the tournament, he floated a delightful ball over the French defence. Sergio Aguero headed in to give voice to his downcast supporters, at least for the remaining few minutes.