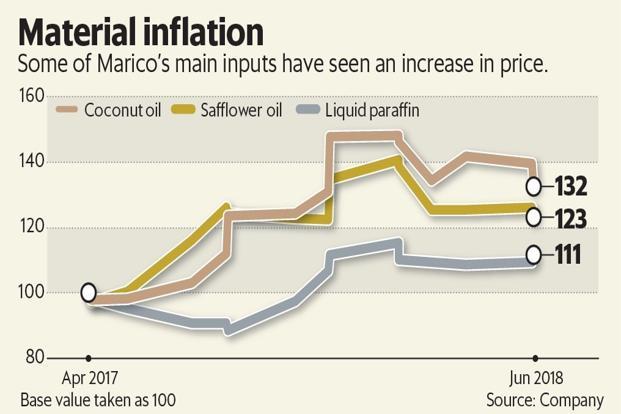 A mere 10% rise in Marico Ltd’s net profit in the June quarter surprised investors, sending its shares 4.8% lower on Thursday. Sharp increase in input costs, mainly of coconut oil, was behind the lower-than-expected growth in profit. It could not entirely pass on the higher costs, which is a sign of poor pricing power.

Rather, Marico uses inflationary periods in coconut oil to mop up loose oil consumers, or even from smaller brands. That could explain why its market share by volume in coconut oil has grown one percentage point from a year earlier to 59%. Absorbing higher input costs does pose a risk to profit margins. But, coconut oil prices have bottomed out in recent months and if that holds up, the strain on margins could ease off.

In the June quarter, Marico’s India business grew 12% in volume terms, although this was off a low base as the year-ago period saw a 9% drop in volume. The international business saw a 3% increase in volume.

While the Parachute oil business saw substantial growth in value terms, both due to volumes and price increases, the hair oil and Saffola cooking oil businesses saw value sales growth trail volume growth. The company has hiked prices of hair oils by 7% on a weighted average basis since 1 July, to pass on higher input costs.

In value terms, Marico’s India business grew 23% from a year earlier, while the international business gained 9% (7% in constant currency), with overall sales rising by 20%.

The sharp increase in costs of 33% saw gross margins slip both over a year ago and sequentially. Still, Ebitda (earnings before interest, tax, depreciation and amortization) margin rose sequentially by 50 basis points, as it reined in other costs. Also, Marico said that it consumed high-priced inventory during the quarter, implying that lower priced inventory in future quarters could bring costs down.

However, the company also said it intends to spend more on advertising and sales promotion to support sales growth. What may give it the confidence to do that, without hurting margins, is the fact that both coconut oil and sunflower prices have eased off their highs.

Marico is hoping that a better monsoon will improve supply and lower prices. This can be tricky. Too sharp a decline in coconut oil prices will see the loose market gain an upper hand. The firm will benefit more from a gradual decline or stable prices.

Although Marico’s performance could improve in subsequent quarters, investor caution is not out of place. Its shares have risen by 16% in the past three months, as the FMCG (fast-moving consumer goods) sector became a favourite hunting ground for investors. The volatility in commodity prices does put Marico on a different ground, compared to others. If a downtrend in price of its key input gets established, then that may be a better time to get bullish once again.