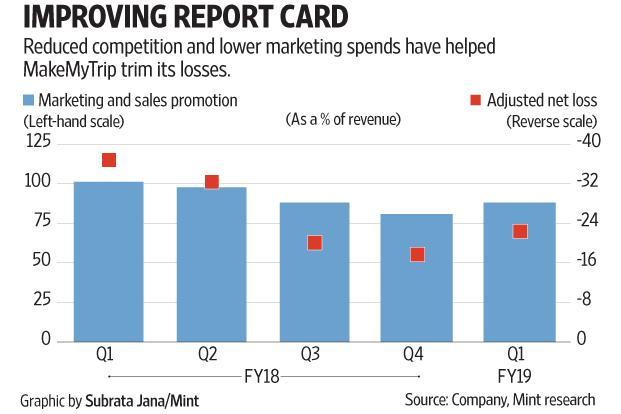 A lot changes in a year. In the June 2017 quarter, MakeMyTrip Ltd’s marketing and sales promotion expenses were higher than its net revenue. Thankfully for the company’s investors, that was a rare feat. Marketing and promotion spend has been curtailed since, thanks to which losses have reduced to 22% of revenue in the June 2018 quarter, compared to 37% a year ago.

After the acquisition of Ibibo Group’s travel business in India in October 2016, MakeMyTrip has had a dominant share of the online air ticketing and hotel booking business. Still, concerns about competition from Paytm.com in the air-ticketing space, and Oyo and Booking.com in the hotel segment had lead to a surge in marketing spends last year.

The concerns have eased “with Oyo changing its business model from being an aggregator to a hotel operator and, now, collaborating with MakeMytrip, and with Paytm pulling back from online hotel booking as it faces competition and initiatives in its payments business (even though it remains aggressive in domestic air ticketing), and Yatra/Cleartrip being constrained on financial muscle, and Booking.com not disrupting the market,” analysts at Nomura Research said in a note to clients earlier this year.

What’s more, volumes have grown at a brisk pace in the air- ticketing space, and MakeMyTrip has managed to extract fairly high commissions for most of the past year.

In the June quarter, however, the so-called take rate, or net air ticketing revenue as a percentage of gross bookings, fell to 6.8% from 7.9% in the March quarter. While this resulted in higher volume and revenue, losses also increased from the March quarter levels.

Adjusted net loss stood at 18% of revenue in the March quarter, and rose to 22% in the three months ended June.

But also note that while the losses in the March quarter were among the lowest in a long while, revenue growth during the period was flat on a sequential basis.

As such, there is a clear trade-off between growth and profitability. While MakeMyTrip may not be pressured by competitors to cut rates, this seems to be the only way to pursue growth. With fuel prices having risen, and airlines reporting losses, take rates may head further south, putting pressure on profitability in the near term.

Nomura’s analysts say: “We believe India is an early-stage market and investments will be required to counter global competition in outbound hotels and to drive penetration in international air ticketing. Also, lower take rates will offset lower marketing spending.”

As the company attempts to find the right balance between growth and profitability, investors may need to be prepared for a long runway before MakeMyTrip breaks even.