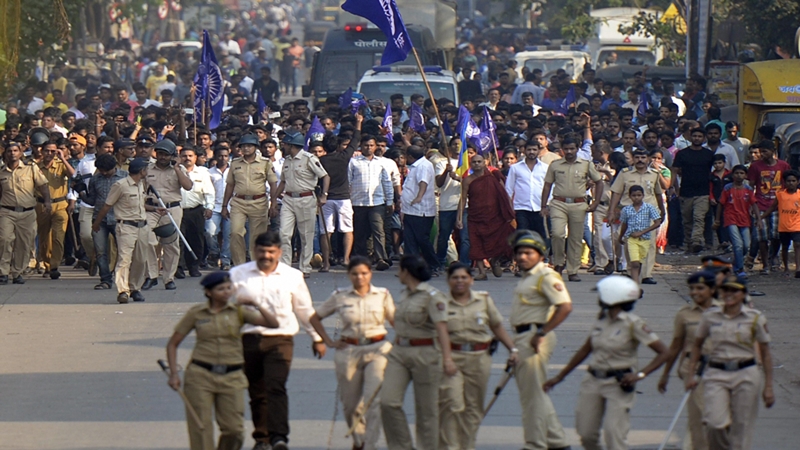 After a day-long disruption in train services and road blockades on Wednesday Maharashtra bounces back to normal life as the bandh was withdrawn by clashing parties later in the afternoon.

The Maharashtra bandh was called by Bharipa Bahujan Mahasangh (BBM) leader Prakash Ambedkar to protest the state government’s “failure” to stop the violence at Bhima Koregaon village in Pune district on Monday.

Normalcy in the financial capital was affected largely after Dalit protesters took to the streets on Tuesday following Dalit-Maratha clashes at Bhima Koregaon near Pune on Monday.

While only few cars were plying on the streets, local trains service were also disrupted as agitators blocked train lines at some places.

The protests left commuters stranded due to less number of auto-rickshaws and other means of transport in the city.

Offices, schools and colleges remained open in Mumbai, though school bus operators did not run buses in the morning as a precautionary measure. Airlines said they will not charge passengers who do not show up for flights.

Shops were shut and Dalit protesters were seen holding rally at various places.

There were also reports of Brihanmumbai Electric Supply and Transport (BEST) buses and a car being vandalised by protesters in Powai.

A car showroom in suburb Vikroli was attacked by alleged Dalit supporters.

The Mumbai Police has advised residents to not believe or spread rumours.

Earlier, protesters tried to halt a train at Thane Railway Station, but were immediately cleared off by the Railway Protection Force (RPF) and Government Railway Police (GRP) officials.

As a precautionary measure, bus services towards Pune’s Baramati and Satara were also suspended. Internet services have been suspended in Aurangabad.

A day after Koregaon, violence erupted in Pune on Monday over the 200th anniversary celebrations of the Battle of Koregaon, claiming the life of a Nanded youth.

Angry protesters blocked traffic and halted railway services at numerous parts of the city while shops and business establishments were shut at Chembur, Vikhroli, Mankhurd, Kurla, Dadar and Govandi.

The police lathicharged to disperse the protesters, who vandalised auto-rickshaws, Brihanmumbai Electric Supply and Transport (BEST) and private buses. Several schools were closed down.

The protests reached the national capital as left student groups staged protests outside the Maharashtra Sadan in New Delhi.

The tension began on Monday when lakhs of Dalits gathered in the village of Bhima-Koregaon, about 30 km from Pune, to celebrate the 200th anniversary of a battle that saw Dalit soldiers fighting with the British, defeating the army of the upper caste Peshwas or rulers.

The clashes erupted during the commemoration by Dalit groups of the battle of Bhima-Koregaon. As an argument between some assembled Dalits and right-wing groups spun out of control, a 28-year-old Maratha was killed.

Right-wing groups question why a British victory against Marathas should be celebrated and accused Dalit leader from Gujarat Jignesh Mewani who was just elected to public office, and Umar Khalid of Delhi’s Jawaharlal Nehru University (JNU) of inciting caste tension.

Appealing for calm, Jignesh Mewani tweeted, “Maharashtra government must ensure rule of law. I appeal to the people of Maharashtra to maintain peace.”

On Tuesday, 100 people were detained in Mumbai, the police said. Most of them were Dalit protesters.