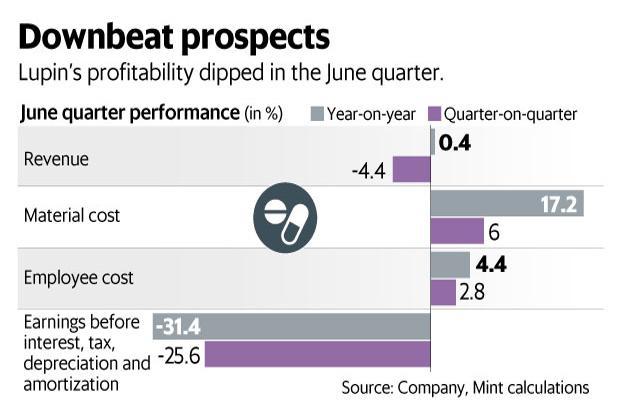 Lupin’s June quarter (Q1) results give an idea about the scale of the challenge it faces in FY19. Its management had said, after the March quarter results, that the current fiscal year will see sales in the US market suffer. It had also said that FY20 will be the year when things turn around and then move up from there. Of course, that’s a long way away, especially in the fast-changing world of pharmaceuticals.

Lupin’s US market sales fell by 26% over a year ago and by 21% sequentially. The company did say that the price erosion in its base business was in the high-single digits, which is a silver lining. The main reasons for the decline were lower share of sales from some of its key products due to generic competition. Sequentially, the decline was exacerbated by sales earned in the March quarter from generic TamiFlu, during the flu season which has now passed. The company expects the second quarter to also be dull but subsequently sales should improve due to contribution from new launches. Commentary on sales of Solosec, an antibiotic, should be watched out for.

On the Indore and Goa plants, the company has sent its last update to the US Food and Drug Administration. While the timelines are unpredictable, these plants getting recertified as compliant could add some more launches to Lupin’s kitty and cheer investors somewhat.

Back home, a low base meant that sales rose by 28% over a year ago, and adjusting for accounting changes, grew by 30.7%. The domestic pharmaceutical market is expected to do well in FY19 and Lupin should also do well. But another key region, Asia- Pacific, did not perform well, with sales declining by 8.4% sequentially but it did grow by a slender 1.5% from a year ago.

Overall, Lupin’s revenue declined by 0.4% over a year ago and by 4.4% sequentially. Since the US is its most profitable market, a decline there affects profitability. This quarter also saw the impact of higher costs of imported Chinese inputs. That led to a dip in gross profit margins (sales less material costs divided by sales), and Lupin expects gross margins to remain at this level in the second quarter as well.

While it did keep a tight rein on employee costs and other expenses, the damage was already done. The company’s Ebitda (earnings before interest, tax, depreciation and amortization) declined by 31% over a year ago and by 25.6% sequentially. Its profit before tax fell by 22.7% over a year ago, but a higher tax outgo led to its net profit (after minority interests) declining by 43.4%.

It’s a tough situation to be in. India seems to be the only market capable of delivering steady growth. All eyes will be on the US market in the second half. Lupin’s ability to ramp-up sales from new launches, enough to staunch the bleed in its existing business lines, is critical for its performance to improve. The many uncertainties in the US market calls for a wait-and-watch approach till the third quarter results are out, to see how its expectations are actually playing out.