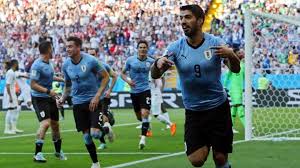 Group A at the 2018 FIFA World Cup belongs to Uruguay. The South Americans, behind a winning free-kick goal from Luis Suarez, pounded Russia 3-0 to win the group with nine out of nine possible points. The host nation finishes second with six points. Suarez scored in the first half, Diego Laxalt scored shortly after and Edinson Cavani put it away in the 90th minute for the three vital points.

Then, with Russia going down to 10 men after a red card to Igor Smolnikov, Laxalt got a fortunate deflection for the 2-0 lead later in the first half for the tournament’s sixth own goal, which matches a record for most own goals in a World Cup.

Cavani’s tap-in at the death completed the dominant scoreline, but it may not be all that bad for Russia. The host nation is likely to play Spain or Portugal in the round of 16, but by finishing second it could potentially avoid teams like Germany, Brazil, Belgium and other big names by going on the opposite side of the bracket. That’s if things work out in its favor, but regardless Russia should be happy to move on and to have an opportunity to watch the film from this one and try to improve.