L&T is better off rewarding investors given the poor investment avenues | BUSINESS
Categorized as
167
Tagged as
share buy-back.
Related 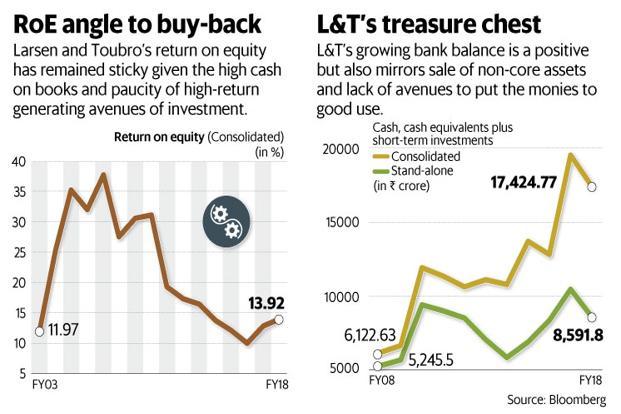 The stock of Larsen and Toubro Ltd (L&T) rose 6.7% on Monday, after the company said it will consider a share buy-back. Details such as the price and size of the buy-back are yet to be decided, but investors are excited just because the company is willing to return cash to shareholders.

L&T’s decision to consider a buy-back shows clearly that the company has too much cash on its books, when compared to investment opportunities in its business segments. At the end of March 2018, it held ₹8,600 crore in stand-alone cash and bank balance plus short-term investments. It was higher at ₹17,425 crore at the consolidated level (see chart)

The buy-back also raises this pertinent question: “Is the capex cycle still some time away that infrastructure and engineering giants such as L&T have a paucity of viable avenues to invest in?”

That isn’t necessarily true. While the company has a rock-solid order book, its recent moves have resulted in an asset-light strategy where investment needs are relatively low.

L&T has sold non-core businesses such as the electrical and automation division, apart from monetizing its road assets. Meanwhile, stringent cost-control is mirrored in a decline in working capital needs in spite of growing revenue.

Analysts say that the shift from ownership to an EPC (engineering, procurement and construction) model in infrastructure has brought down the need for huge cash deployment in operations.

Shareholders typically welcome buy-backs as excess cash is returned so as to avoid dragging down return ratios of the company.

From the company’s perspective, it is also a relatively safer option compared to dividends as it is seen as a one-off event. Maintaining large dividend payments annually can be difficult during times of earnings slowdown.

For L&T, this will be the first-ever buy-back.

In L&T’s case, the low yield on the virtually idle cash held in the bank is diluting the return on equity (RoE), as seen in the chart. Its RoE was around 31% in FY10 before the economy slipped into a slowdown. It has now dropped to 14%.

A report by Motilal Oswal Securities Ltd says that assuming a buy-back up to 10% of L&T’s net worth, the size of the buy-back would comprise only 3% of its current market capitalization. Besides, the positive news has already been factored into the sentiment, which is mirrored in the 6.7% jump in the share price.