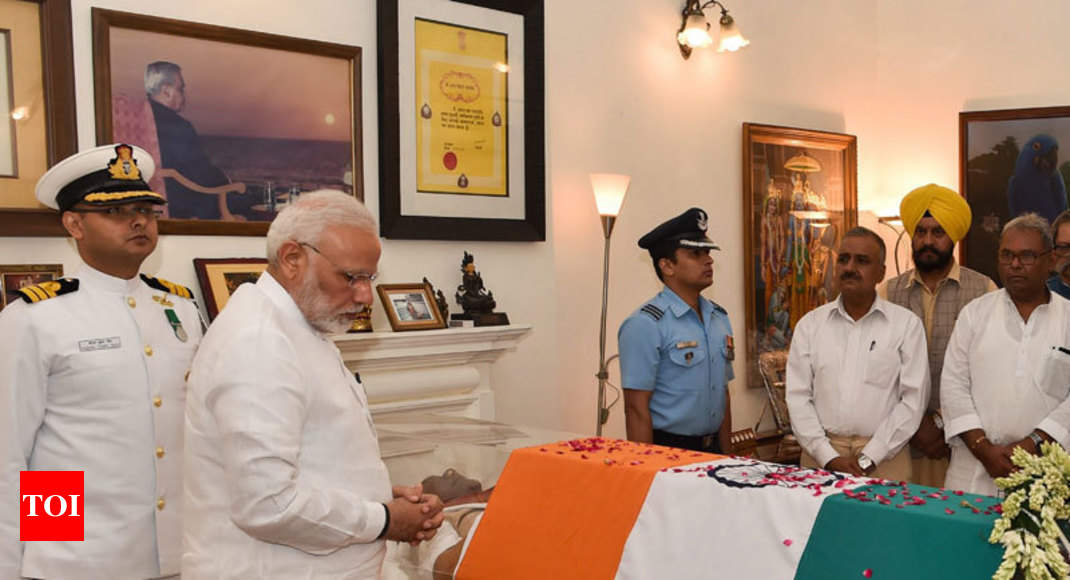 In a brief televised address, Modi said through his leadership and struggles, Vajpayee had strengthened the Jan Sangh and the Bharatiya Janata Party (BJP).

“He took these parties to every part of India and spread the policies and philosophy of the BJP to the people,” he added.

Modi said he had lost a “father figure” today.

I have lost a father figure. Atal Ji taught me vital facets of both ‘Shaasan’ and ‘Sangathan.’ His noble though… https://t.co/cMiQoiYicn

“Atalji taught me valuable aspects about ‘sangathan’ (organisation) and ‘shaasan’ (administration),” he added.

The Prime Minister said whenever he met Vajpayee, the latter hugged him with affection.

“We have lost our inspiration. We have lost an ‘Atal Ratna’. The personality of Atalji and the sadness due to his demise cannot be described in words. The void cannot be filled ever,” he added.

Modi hailed the BJP stalwart as a wonderful orator, a prolific writer and one who dutifully served the country.

India grieves the demise of our beloved Atal Ji. His passing away marks the end of an era. He lived for the natio… https://t.co/Fw5VXLwldE

Earlier, in a series of tweets, the Prime Minister said Vajpayee’s demise marked the end of an era and described it as a “personal and irreplaceable” loss for him.

He said the BJP patriarch lived for the nation and served it assiduously for decades, while noting that it was Vajpayee’s exemplary leadership that set the foundations for a strong, prosperous and inclusive India in the 21st century.

Vajpayee died at the AIIMS hospital here this evening at the age of 93, following a prolonged illness.

“Atal Ji’s passing away is a personal and irreplaceable loss for me. I have countless fond memories with him. He was an inspiration to Karyakartas like me. I will particularly remember his sharp intellect and outstanding wit.”

It was Atal Ji’s exemplary leadership that set the foundations for a strong, prosperous and inclusive India in the… https://t.co/C7LfqTorcC

Atal Ji’s passing away is a personal and irreplaceable loss for me. I have countless fond memories with him. He was… https://t.co/OXQaqTfozH

It was due to the perseverance and struggles of Atal Ji that the BJP was built brick by brick. He travelled across… https://t.co/UcKmAxi1EN

“It was Atal Ji’s exemplary leadership that set the foundations for a strong, prosperous and inclusive India in the 21st century. His futuristic policies across various sectors touched the lives of each and every citizen of India,” Modi tweeted.

He said it was due to Vajpayee’s perseverance and struggles that the BJP was built brick by brick.

“He travelled across the length and breadth of India to spread the BJP’s message, which led to the BJP becoming a strong force in our national polity and in several states,” the prime minister said in another tweet.

He said India grieved the demise of Vajpayee.

“My thoughts are with his family, BJP Karyakartas and millions of admirers in this hour of sadness. Om Shanti (sic),” Modi added.