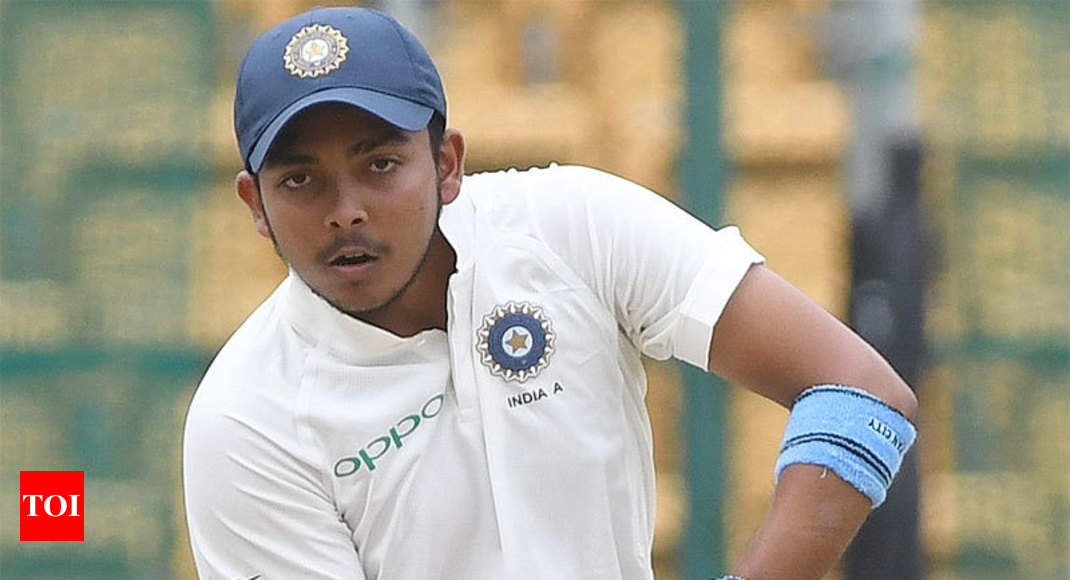 BENGALURU: Prithvi Shaw had a dream run in England during the limited overs and four-day game series recently, and on returning home, he showed his versatility and ability to adapt to varied conditions quickly. On Sunday, he slammed an entertaining 136 and shared a 277-run opening stand with Mayank Agarwal to hand India ‘A’ the advantage over South Africa ‘A’ here.

Shaw’s 240-minute stay at the crease was studded with an array of drives. He picked the off-side, and despite the opposition packing it, the 18-year-old still found the gaps. The Mumbaikar, who is now used to opening the innings with the Bengaluru talent, said: “We had some good partnerships in England and it’s great to continue it over here. We talk on the field and that helps us. Whenever he commits a mistake I point that out and vice-versa. It’s important if you want to build the innings.”

On his partner’s unconquered double century, Shaw, who notched up three centuries and two half-centuries across formats in England, said: “I think it is the best innings that I have seen from him. We had a huge partnership and he is still there and I want him to score more tomorrow as well.”

Shaw is predictably thriving under the mentorship of Rahul Dravid. Pointing out the influence of the batting stalwart on his game, Shaw, who has gone through the struggle of getting his backfoot across, explained: “In the practice sessions, I tried to get my backfoot back and across, but right now that’s not happening. But Rahul sir said it’s fine as long as I am scoring runs. I know it’s a mistake but I still feel comfortable with it. Rahul sir keeps talking to us about the importance of being there mentally and being consistent. So, I am keeping all those things in mind and going there and batting for long hours.”