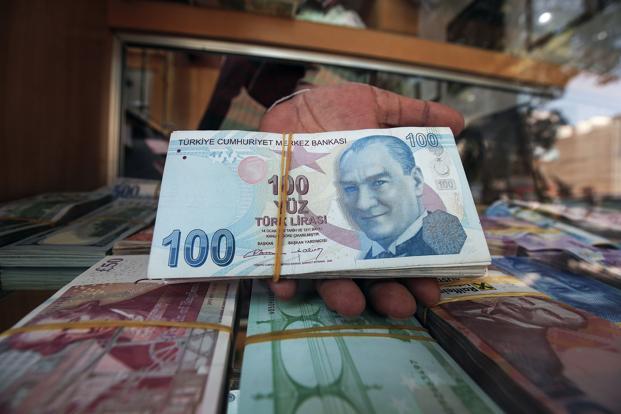 The Turkish lira weakened past 7.23 per dollar amid thin volume before paring losses after the nation’s banking regulator stepped in to limit swap transactions on the battered currency. Photo: AFP

Singapore: Turkey’s lira extended its precipitous slide Monday, with the selloff spreading to other emerging-market currencies, after the nation’s president showed no signs of backing down in a standoff with the US. The lira weakened past 7.23 per dollar amid thin volume before paring losses after the nation’s Banking Regulation and Supervision Agency stepped in to limit swap transactions on the battered currency. Treasury and finance minister Berat Albayrak said the nation will announce steps to calm markets on Monday, Hurriyet newspaper reported.

The reported measures “have evidently had some impact in pulling the lira back higher,” said Ray Attrill, head of foreign exchange strategy at National Australia Bank Ltd in Sydney. Still, “there’s nothing as yet to suggest that the government, or Turkish central bank, is poised to announce the fiscal or monetary policy measures capable of quickly restoring confidence in Turkey.”

The Turkish currency has been a casualty of a deepening crisis spurred by the administration’s growth-at-all-costs agenda and a worsening spat with the US, which sanctioned Turkey over the detention of an American priest. The lira’s plunge to a new record low and fears of a contagion sparked tremors through global markets on Monday, dragging a gauge for emerging-market currencies to the lowest in more than a year.

The dollar climbed as much as 13% to 7.2362 against the lira, with some banks said to avoid providing two-way prices amid unprecedented volatility. The South African rand fell to its weakest in more than two years, while the Mexican peso dropped 2% against the greenback.

“The decline in the lira is multifaceted, caused not only by a weak external position in terms of current account deficit and inadequate currency reserves, but also the challenging political environment which exacerbates the vulnerabilities in the lira,” said Kerry Craig, global market strategist at J.P. Morgan Asset Management. “This may fuel volatility in EM assets and dampen investor sentiment in the near term, as markets are already skittish.”

The extended rout in the lira also weighed on the euro and the Australian dollar, while spurring haven demand. The Aussie fell 0.4% against the dollar, while the yen strengthened against every Group-of-10 peer and Treasuries were bought.

“It’s still the case that the euro and Australian dollar are most readily in the firing line, given concerns over euro zone exposure to Turkey and the Aussie’s status as the market’s preferred EM/risk proxy,” NAB’s Attrill said of the impact of the falling lira on Group-of-10 currencies.

The sell-off also represents a vote of no-confidence in a new system of government that earlier this year handed President Recep Tayyip Erdogan unrivaled authority, essentially paralyzing the bureaucracy in Ankara. In speeches Sunday, Erdogan remained defiant, vowing never to give in on interest-rate hikes. He also ruled out an agreement with the International Monetary Fund.

Years of a growth-at-all-costs policy bias have left Turkey’s companies saddled with hundreds of billions of dollars in foreign debt, runaway inflation and one of the world’s largest current-account deficits.

“Rate hikes would not be enough, with Turkish officials needing to create a credibility shock,” Guillaume Tresca, senior emerging market strategist at Credit Agricole CIB, wrote in a Aug. 10 note. “A complete rebalancing of the economy is needed, with a new economic team and a real commitment to the central bank’s independence.”

Turkey’s central bank — which has raised its main policy rate to 17.75% — unexpectedly refrained from a further hike at its last meeting. While investors are pleading for dramatic central bank action to bolster the lira, Turkish officials fear that even a huge increase in borrowing costs could be quickly offset by another round of US sanctions, according to two people familiar with the thinking of the country’s economic administration.

A Turkish acknowledgment of the dangers ahead is nevertheless needed to soothe markets and even if the central bank provides only a stop-gap solution, it should still be done, according to Refet Gurkaynak, a professor of economics at Bilkent University in Ankara.

“It will signal that they are not looking at off-market solutions such as capital controls, conversion of FX deposits” and other unorthodox policies, he said. “To work, it will have to be large and would have to be accompanied by a ‘whatever it takes’ statement.”