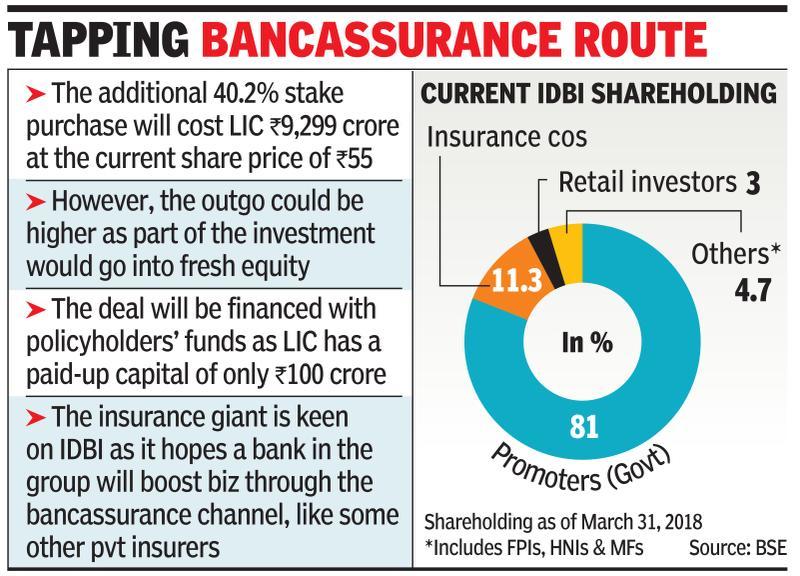 MUMBAI: The Insurance Regulatory and Development Authority of India (IRDAI) has agreed to the Life Insurance Corporation (LIC) of India’s proposal to hike its stake to 51 per cent in IDBI Bank from 10.8 per cent at present. The permission is subject to the corporation bringing down its holding to 15 per cent in future.

The IRDAI board, which met in Hyderabad on Friday, cleared the proposal put forward by the LIC. It will now have to be cleared by the state-owned insurer’s board. According to sources, the corporation believes that having a bank within the group will help increase its share of business through the bancassurance route. An official said, “Private life insurers with a bank within the group generate nearly half their business through the bancassurance channel. In the case of LIC, it is less than 3 per cent.”

LIC, with assets under management of over Rs 30 lakh crore, has been priding itself as the largest financial institution in the country. The insurer had first made a pitch for a banking licence over 16 years ago when SBI got its life insurance licence. Subsequently its housing finance arm LIC HFL had put in an unsuccessful application for a bank licence. The corporation was a founding investor in Axis Bank in the ’90s and had also picked up a 28 per cent strategic stake in Corporation Bank. However, none of these investments served the desired purpose.

HDFC Life, ICICI Pru Life and SBI Life are among the private insurers that get a sizeable portion of their business through bancassurance. While LIC will be allowed to take control of the bank, the regulator is not changing its rules and requires the insurer to bring down its holding to 15 per cent. The board has not specified the time frame. The Reserve Bank of India’s (RBI’s) norms too require that promoters of private banks bring down their shareholding to 15 per cent. However, the RBI also does not have fixed deadlines.

An additional 40.2 per cent stake for IDBI Bank will cost LIC Rs 9,229 crore at the current share price of nearly Rs 55. However, the investment by the corporation will be higher as part of it would go into fresh equity. Earlier, LIC had picked up a 28 per cent strategic stake in Corporation Bank, which is now currently down to 13 per cent. Although this is in the nature of a strategic investment, the money will come from policyholders’ funds. LIC has a paid-up capital of only Rs 100 crore. What seems to have swung the decision in favour of IDBI Bank is that there are no major legal changes required for its acquisition.

On the other hand, the government cannot bring down its stake below 51 per cent in nationalised banks without amending the Bank Nationalisation Act.

As compared to IDBI Bank, some other public sector lenders have better distribution reach and a larger customer base. For instance, Punjab National Bank (PNB) with 6,900 branches has a market cap of Rs 21,000 crore compared to the Rs 23,000-crore valuation for IDBI Bank with 1,916 branches. Also, IDBI has 1.14 crore debit card holders as against 6.23 crore cardholders that PNB has, which gives an indication of the savings account base.