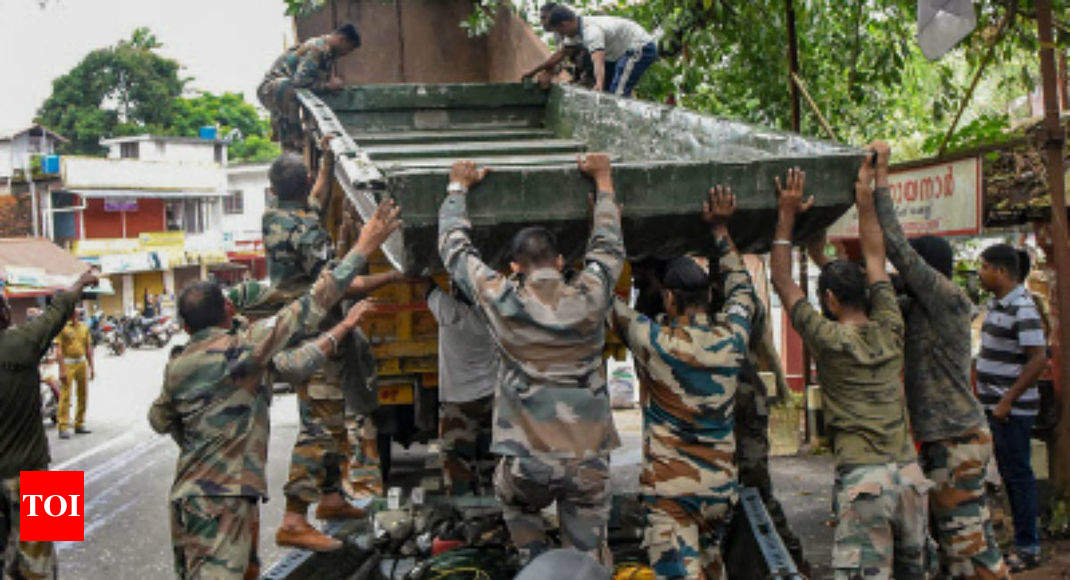 KOCHI: The Southern Naval Command of the Indian Navy today started scaling down ‘Operation Madad’ consequent to rains having reduced and floodwaters receding from many areas in Kerala, a defence press release said here.

As of 4.30 pm today, the 11th day of the operation, the number of diving teams has been reduced to 51, with 41 teams having returned after their rescue mission, the release said.

A total of 350 people was rescued by boats from this morning, the release said.

No requests for airlifts were received; however, 35 air sorties amounting to 62 hours of flying were undertaken by various naval aircraft, mainly for air-dropping of relief material, especially food and water, it said.

A total of 20 rescue teams with one Gemini boat each had been deployed in Ernakulam district, it said.

One team is on Pizhala island, one at Edapally,seven at Perumbavur, three at North Paravur, one at Aluva and seven at Kadangallur, the release said.

In Pathanamthitta district, 21 teams have been deployed at Chengannur and nine positioned at Thiruvalla, it said.

One specialist diving team airlifted to Kannur successfully undertook diving operations at Pazhassi Dam and was successfully able to remove mud from a landslide blocking the water pumping mechanism, which has enabled restoration of the primary supply of water to Kannur city, the release said.

Based on a request received from civil authorities, another rescue team was dispatched to Thrissur district, which was able to save 109 lives, it said.

A bridge across a stream had collapsed and 109 personnel were trapped on the other side, it said.

The rescue team displayed professionalism, innovation and courage in bringing all the stranded people back to safety, it said.

The team joined six ropes to make a line across the fast-flowing stream, using trees as anchors, the release said.

In another development, the Naval Air Station, Garuda commenced civil aircraft operations from the morning, it added.

Alliance Air, a subsidiary of Air India, was able to operate two flights to Bengaluru and one to Coimbatore.

An Indigo flight also did a trial landing and would be undertaking flying operations tomorrow.

Another sector, Chennai is also likely to get added for flights to and from Kochi, the release said.

Approximately 150 rescued people are presently being accommodated at the T2 hangar inside the Naval Base, which has been running as a make-shift relief camp since August 16.

The second camp being run at the Naval Kindergarten (NKG) School was, however, shut down as the number of rescued persons reduced drastically and many have already left for their home, it said.

Another relief camp set up by the Naval Armament Depot, Aluva, has also seen reduction in the numbers, it said.

The medical camp, however, continues to provide first aid and other treatment for the needy, the release said.

A community kitchen set up by INS Venduruthy on the campus of Cochin University of Science and Technology (CUSAT) also continues to offer hot meals for about 3,000 people, the release said.

Seventeen cooks, four officers and 13 staff members were working tirelessly to serve all three meals and tea twice a day for the needy, it added.