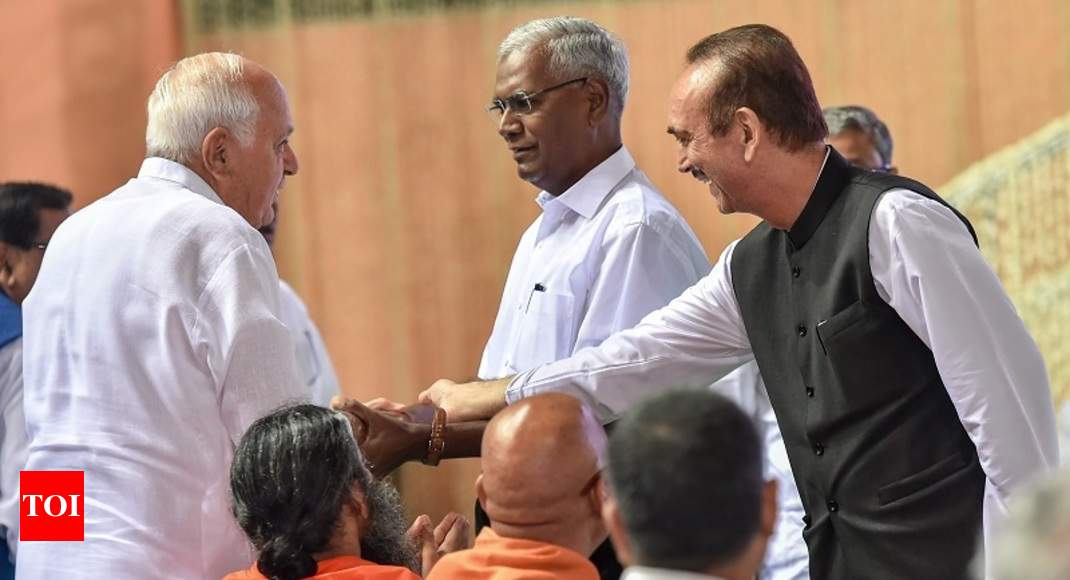 NEW DELHI: Former Prime Minister Atal Bihari Vajpayee’s memorial function turned out to be a forum of unity for all parties cutting across the political spectrum here on Monday as leaders showered rich tributes to the tallest figure in BJP who passed away on Thursday, after a prolonged illness and even as he had dropped out of public life for more than 10 years.

“Vajpayee had brought together leaders cutting across ideological divides even in his death,” said Congress leader Ghulam Nabi Azad as he spoke at the condolence meeting, adding that “He was something rare.” Azad represented his party president Rahul Gandhi, who could not make it as he was caught up for a function on the occasion of his father and former Prime Minister Rajiv Gandhi’s birth anniversary.

From PM Narendra Modi to senior-most party man and Vajpayee’s partner in politics and beyond for 65 years, L K Advani, RSS chief Mohan Bhagwat, BJP chief Amit Shah, recently estranged NDA ally PDP leader Mehbooba Mufti, former ally National Conference leader Farooq Abdullah, CPI leader D Raja, BSP’s Satish Mishra, Trinamool Congress’ Derek O’Brien , former JD(U) leader Sharad Yadav, Union minister Ram Vilas Paswan and many others attended the event. All of them were seated next to each other as many of them spoke, heaping praises and narrating bits of their own experiences with the departed leader, on the occasion.

There was also one man in the crowd, who came in quietly and sat far from the VIP enclosure and left midway through the programme, unescorted. It was Govindacharya, who had to leave BJP for calling Vajpayee, a “mukhota” (mask), and hence ended his political career. But, they were all there to pay their homage in their own way.

Heaping praises on Vajpayee, Azad said Vajpayee was such an eloquent speaker that even his criticism sounded pleasant whereas, there are some leaders who, even when they say something good, make it sound like abuses. Recalling his days as parliamentary affairs minister in the PV Narasimha Rao-led government, Azad said he had to meet Vajpayee, then a key opposition leader, several times a day during Parliament’s sessions and they used to have tea and meals together. “The distance we see today was not there then,” he said, apparently referring to the frosty relations between the government led by Modi and the opposition. He mentioned leaders like Jawaharlal Nehru, Subhas Chandra Bose, Maulana Abdul Kalam Azad and Indira Gandhi and said Vajpayee would be remembered as one of the biggest leaders of his time who always worked for the country and its people.

PDP leader Mehbooba Mufti, who led a coalition government with BJP in Jammu and Kashmir till recently before it ended bitterly as BJP pulled out, called “Vajpayee ji a messiah for the people of Kashmir.” She said, “He was the only Prime Minister who could understand people of Kashmir. When people talk about Kashmir they talk about trust deficit but Vajpayee had developed trust among people of Kashmir. There was a presumption that Kashmir polls are fixed as a chief minister is decided at the will of Kashmir, but Vajpayee went on to announce from Red Fort that there will be free and fair polls which happened in the state,” in a message to the present regime and the state of things in the Valley.

NC leader Farooq Abdullah, who was an important member of the NDA government led by Vajpayee and Advani was overwhelmed in his comments at the gathering. “The real tribute to Atal Bihari Vajpayee will be to walk the path shown by him. He believed in inclusiveness. Nation building should be done along the lines of what Vajpayee had dreamt of… after Kargil (war) I asked him, was it required, to which Atalji replied: We shall not use it but I wanted to let the world know that we have the power.”