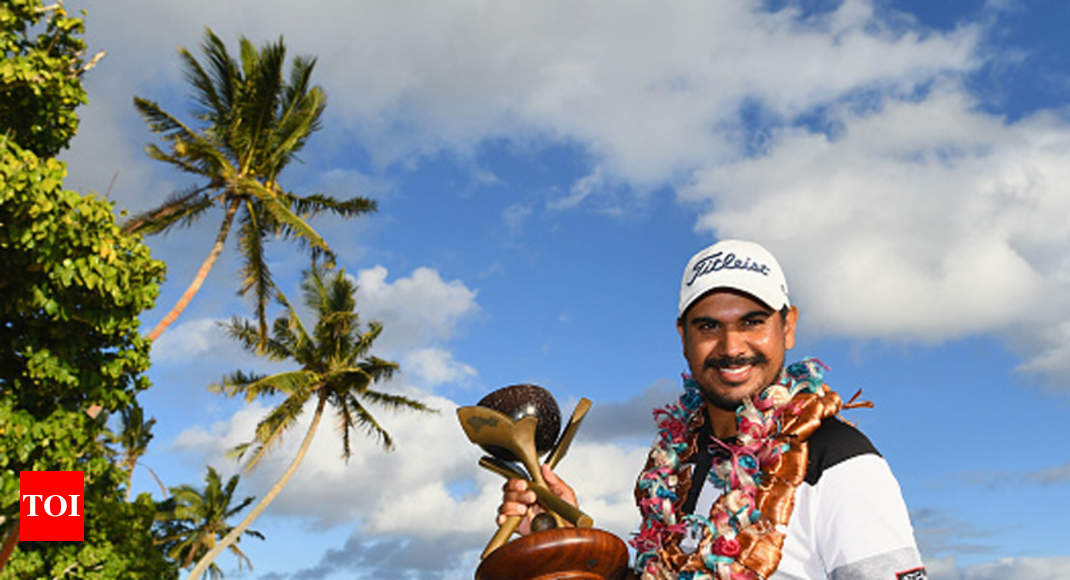 WELLINGTON: India’s Gaganjeet Bhullar chipped in from off the green to record an eagle on the 17th hole to propel himself to a one-shot victory in the Fiji International over Australia’s Anthony Quayle at the Natadola Bay Championship Golf Course on Sunday.

The 30-year-old’s eagle gave him the lead over the Queenslander, who shot an impressive nine-under 63 while playing with South African great Ernie Els.

Bhullar made par on the final hole, leaving his birdie putt a matter of inches short, to finish with a six-under 66 and 14-under total of 274 to give him his ninth win on the Asian tour.

Quayle finished on 275, while Els shot a seven-under 65 to tie for third with New Zealand’s Ben Campbell. Both finished on 12-under 276.

“I was in basically the same place on day two and the flag was on the same side of the green so I had a little bit of an idea that the chip would run a lot,” Bhullar said of the tournament-winning shot on the par-five 17th.

“It wasn’t an easy chip. I could have settled for an up and down … but I knew that I would need to go birdie-birdie to have a chance to push for a playoff.

“I think the chip in … closed the deal.”

Bhullar had held a one-stroke lead heading into the final round and started solidly with three birdies in his first four holes but then said he was struggling as he approached the turn in difficult, windy conditions.

Despite making his fourth birdie of the round on the par-five ninth, he was forced to save par on the 10th hole that he felt arrested what could have been a slide downhill on the back nine.

“Things were a little bit tough for me but I managed to make a really good par save on 10 and that gave me a really big boost and a lot of confidence,” he said.

“After that it was just one shot at a time.”

The right-hander, who has also won nine titles on the Indian Tour, then sunk his fifth birdie on the 13th before his chip on 17 gave him the one-stroke cushion over Quayle.

“I knew somebody would go low,” Bhullar said.

“Anthony played really well. Nine-under in these conditions, it’s a great, great round of golf.”