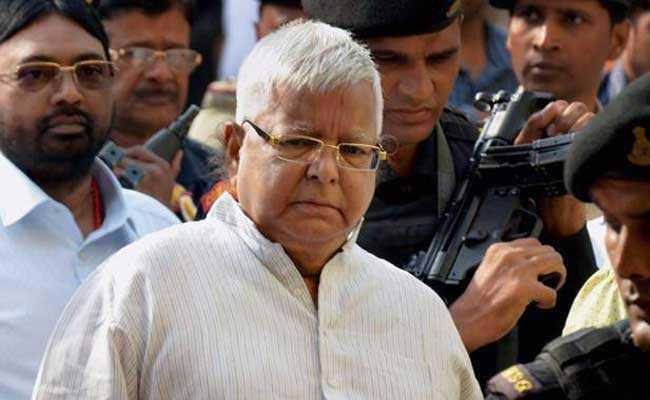 Former Bihar chief minister Lalu Yadav, who is serving a jail term in the second fodder scam case, has been convicted in a third. The sentence is expected to be announced later today. Verdicts in two other cases are expected over the next few months. The fodder scam involved the embezzlement of more than Rs. 970 crore in government funds during Lalu Yadav’s term as the Chief Minister of undivided Bihar from 1990 to 1997. The latest case involves the siphoning of Rs. 33.67 crore from the Chaibasa treasury against an allocation of Rs. 7.10 lakh in 1992-93. Mr Yadav was named as the main conspirator by the Central Bureau of Investigation.

Former Bihar Chief Minister Jagannath Mishra, who was acquitted in the last fodder scam case, has been convicted in this one.

Earlier this month, Mr Yadav was sent to jail over fraudulent withdrawal of Rs. 89 lakh from the Deoghar district treasury between 1990 and 1994. Sentenced to a three-and-a-half-year in prison, Mr Yadav has applied for bail. The hearing is on.

The 69-year-old, who is at Ranchi’s Birsa Munda jail, has turned down the offer of the judge to shift him to an open jail — cottages where prisoners can stay with their families. He told the judge that it might be difficult to keep law and order there since his supporters would insist on accompanying him there.

He also asked judge Shivpal Singh, who is hearing one of the two other fodder scam cases, the Dumka treasury case, to be “lenient” next time.

Lalu Yadav was also convicted in the first case of fodder scam four years ago and got bail after staying in prison for two months. After his second conviction — announced by a Ranchi court last December — Mr Yadav and his party cried foul, calling it political vendetta. Mr Yadav’s party had been shunted out of power last year after Nitish Kumar dumped the Grand Alliance with him and the Congress and entered a partnership with the BJP.