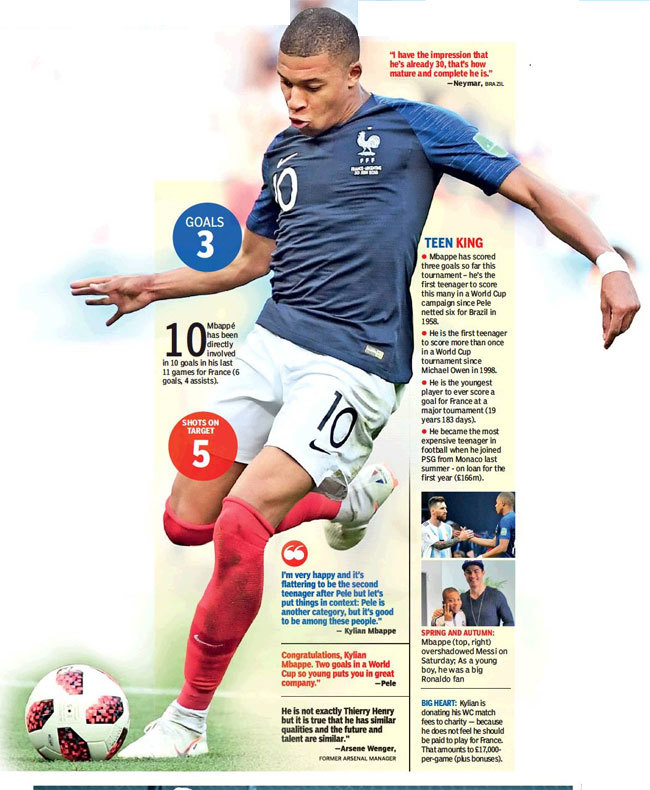 KAZAN: “Run Forrest, run”, someone must have been drilling these words in Kylian Mbappe’s ears. Else, why would a 19-year old snatch a ball in front of his goal and explode into a time-splitting, space defying forward motion? The ball was not his birthday gift and the occasion certainly was not the local league final in an alley behind his Paris home.

Mbappe, already the most expensive teenager and the second most expensive player ever, needed a stage. The informed ones discuss his mind-numbing price and try to follow his game with PSG, if the telecast timing doesn’t clash with La Liga or EPL.

Yes, the kid needed a stage to tell the world that he is special. PSG has broken the bank for a reason – Mbappe is a long-term investment. This is one of the reasons why Mbappe launched his sprint in the World Cup pre-quarterfinals against Lionel Messi’s Argentina at the newly-built Kazan Arena.

Maracana, Bernabeu, Old Trafford or Nou Camp have witnessed the flowering of heroes over the years. Like all stadiums, Kazan Arena needed one too. On Saturday, it got its first in a precocious French kid who blazed the firmament like a comet, with its tail still visible long after the night was over. Two goals came from his exhibition of raw speed which was redolent of Usain Bolt.

The sheer monstrosity of Mbappe’s demonstration destroyed Argentina and the scoreline (4-3) for once did injustice to the story that had unfolded. Immediate parallels with Pele were drawn and the Brazilian, unwell and nearing 80, tweeted: “Congratulations, @KMbappe. 2 goals in a World Cup so young puts you in great company! Good luck for your other games.”

Finding France’s third goal following a twist of his supple waist that shocked Federico Fazio, Mbappe was given escape velocity when Olivier Giroud poked the ball ahead, as if it was a teaser. Finding an extra gear that had flummoxed Marcus Rojo earlier, Mbappe pressed on it once more. Switching from being speedy to fast in a fraction, the young Frenchman connected without breaking a stride.

It triggered the start of a new argument, whether he can replicate Pele. “I’m very happy and it’s flattering to be the second teenager (to score twice in the knock-out rounds) after Pele but let’s put things in context. Pele is another category, but it’s good to be among these people. As I’ve already and always said, at a World Cup you have all the top-level players, so it’s an opportunity to show what you can do and what your abilities are. There’s no better place than a World Cup.” Definitely a level head sits on those Atlas-like shoulders.

In the audience was Diego Maradona, whose one run down the middle of the English side of the pitch, deified him forever. He had come to share the joy of Argentina’s victory. Instead, he left celebrating the birth of a star from the other side of the pond.

“Kylian is a player steeped in qualities but he still has a lot of room for improvement,” insisted Les Bleus coach Didier Deschamps. “We must not forget that he is only 19 years old.”

Mbappe had been avoiding the media so far. After his man-of-the-match performance, he had to face the camera. As he was trying to string together his thoughts, Antoine Griezmann broke through and said, “Together we can do beautiful things.”

Born in Bondy, in the suburbs of Paris, Mbappe is of Cameroonian descent and doesn’t like doing things the normal way. A French newspaper wrote, “He arrives for warm-up with shorts different from the others and ends up being the top scorer of the French team with three goals.”

Another called him a Baudelairian striker with whom everything is luxury, calm and voluptuousness.