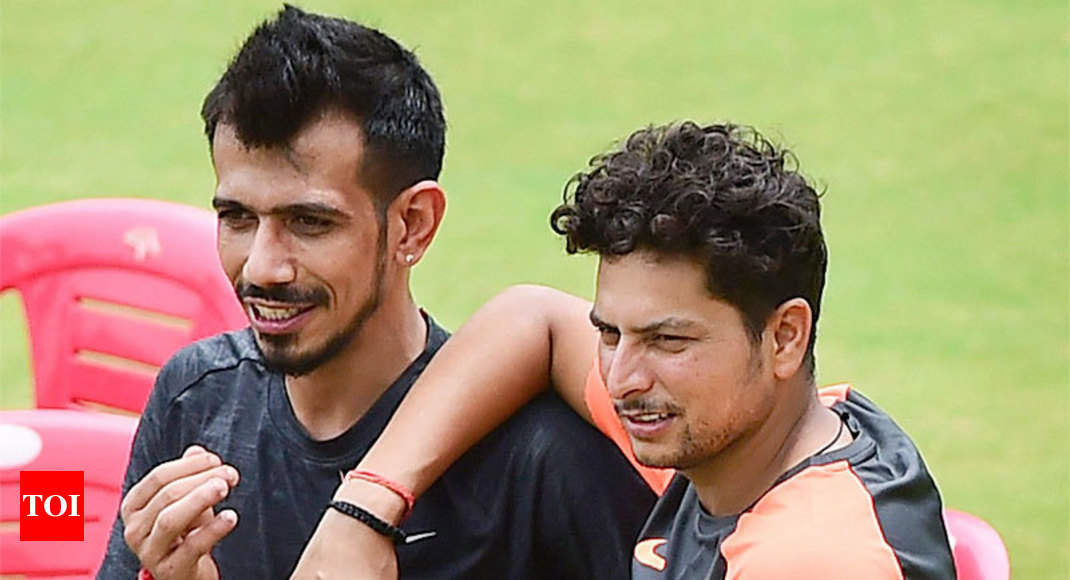 BRISTOL: Rendered ineffective in the previous match, India’s wrist spinners Kuldeep Yadav and Yuzvendra Chahal would look to bounce back against ‘well-prepared’ England batsmen as the two teams clash in the series-deciding third Twenty20 International on Sunday.

ALSO READ: England tackled Kuldeep well and it made the difference, says Kohli

The Indian spin duo faces its first real challenge in more than a year with England batsmen biting back immediately after drubbing in Manchester. From Sri Lanka, to Australia, to New Zealand, and to South Africa, none of the opponents could easily contend with Chahal-Kuldeep in such quick time.

With Kuldeep returning wicket-less in Cardiff after a sensational five-wicket show in the series-opener and Chahal too taken for runs on Friday, they need to find ways to trouble the opponents.

India missed injured Jasprit Bumrah’s services on Friday during the death overs as England hit three sixes. His replacement Umesh Yadav has provided wickets (four in two matches) in the powerplays, but he has also been taken for runs at the same time.

Despite the disappointment on Friday, the visitors are still in contention for their sixth consecutive T20I series’ win, which is part of an unbeaten run stretching back to September 2017.

The last time India lost a bilateral T20I contest was against West Indies in July 2017, albeit that was a one-off game. In fact, India’s last series’ loss with more one T20I game also came against the same opposition, at Florida in August 2016.

In between those two losses to West Indies, India beat England 2-1 in a three-match T20I series at home in January 2017. That contest is notable because India were 1-0 down, and came back to win the series with Chahal taking career-best 6-25 in the series’ decider at Bengaluru.

Wrist spin continues to be a deciding factor in the current series as well. Kuldeep brought the shock-value to the mix of things at Manchester and duly bamboozled England. The hosts, in turn, prepared well for the second game, despite the short turn-around time, and with a little aid from the pitch, played more selectively against both wrist spinners.

A little change in the England batting line-up also worked wonders. Joe Root was sent up at number four, with skipper Eoin Morgan dropping down to allow the former more time at the crease. While it didn’t help Root in particular as he failed to read the googly for a second match running, it did allow Alex Hales to build partnerships and anchor their win.

Hales was included in the side in place of injured all-rounder Ben Stokes, but on current form, it will be tough to leave him out. Stokes returns to the England squad for the third match and bolsters their confidence being yet another key member to have played in the IPL.

In the current scenario, he could walk into the playing eleven in place of the struggling Root, based alone on the fact that he has played enough against both Chahal and Kuldeep in the last two IPL seasons.

Stokes will also provide another seam-bowling option, and thus it remains to be seen if Moeen Ali will return to the eleven. It will depend on pitch conditions. A similar wicket to the one in Cardiff will see the all-rounder sitting out again, for the boundaries at the Gloucestershire County Club will be short once again. That India played spin well in both matches will also be a factor.

The conditions concern India as well. Thanks to the last layer of grass remaining on the surface, England used the short ball tactic against the top-order. Both Rohit Sharma and KL Rahul struggled to get going against the short deliveries, while Shikhar Dhawan and Suresh Raina looked ill at ease. Even Virat Kohli was out caught pulling a short one straight to fine leg, albeit in the death overs.

Morgan outlined that the short-ball ploy was more to do with conditions than anything else, but it is tough to see the hosts abandoning a plan that worked so well. The shorter boundaries will only re-affirm such a plan once again.

Victory on Friday would have allowed India to experiment in the third game, with the likes of Manish Pandey, Siddarth Kaul, Krunal Pandya and Deepak Chahar waiting in the wings. The same is true for England as well, particularly regarding their batting order. With the series pegged at 1-1, it is difficult to envisage either team playing around with combinations as a lot is at stake.

If Pakistan beat Australia on Sunday, India could climb to number two in the ICC T20I rankings with a series’ win, relegating England to number seven. Even so, this is about more than just rankings at this juncture. At the start of what promises to be an intensely fought summer of cricket, this is now about bragging rights and carrying winning momentum into the ODI series.