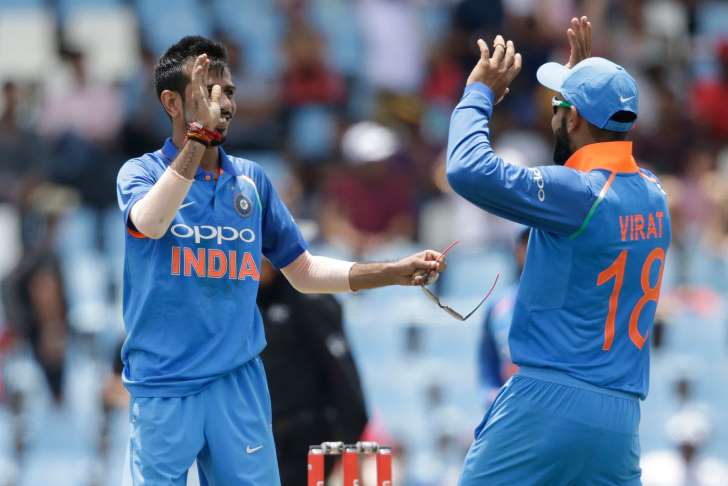 Twenty-one wickets between them at an average of 9.05. A combined economy rate of 3.63. A wicket every 15 balls. India’s spinners have Virat Kohli eating out of their wrists. And the captain is amazed and thankful that they are both winning him matches, so much that he won’t deny they could soon push for places in the Test side, whose incumbents not long ago were the two top-ranked bowlers in the world.

“Those are things that are quite a bit away from now,” Kohli said when asked of the Test chances of Kuldeep Yadav and Yuzvendra Chahal, especially away from home. “Look they are obviously making a very strong case for themselves, bowling in these conditions and making breakthroughs like we haven’t seen before. It’s outstanding to see two guys just totally spinning a web around the opposition. There doesn’t seem to be a way out at all. It’s unbelievable. Taking eight wickets today. Outstanding.

“I don’t have words to explain this. Credit to them. Both have been working hard on their game. Both are very brave in terms of how they bowl and the kind of fields they want as well. They are very brave tossing the ball and asking the batsman to come out and play a risky shot. Hats off to them but the other debate is a bit away from now. You never know what happens in the future but I am really happy at the moment.”

India were obviously hopeful the spinners would do well for them but to this extent? “We knew they will pick up wickets,” Kohli said. “Because wristspinners, these guys have bowled in flatter batting tracks at home. Some might think they have bowled in T20 cricket when the conditions are very very difficult and they have picked up wickets on a regular basis, you know.

“Here they felt even better because they were getting bounce. On some pitches like today, it got really slow at the end so they were getting turn as well. They feel at the top of their game when they have the pitches supporting them even a little bit. But they are very brave and even on flatter pitches, wristspinners will also come into play and they have made that difference in the game. They might go for six an over, we knew that, but they will pick up three-four wickets between them. They have done outstandingly well in the last two games picking up a majority of the wickets in both games and being the difference between both sides.”

“So I think all the credit has to go to them because they’ve executed those lines and lengths perfectly. They’ve always, every over they’ve asked two-three questions of the batsmen, that is something outstanding. I haven’t seen that before. Every over they might pick up two wickets, that is the kind of belief they have in their abilities. The team has a belief in them, the team is backing them.

“They might get hit for 70-odd in the next game. But there is no problem in that because you know that if they bowl attacking lines then they will end up picking two-three wickets every game. In these conditions now and we are going to play the World Cup away from home, that I think is going to be the massive X-factor for us.”

The biggest acknowledgement is usually the opposition’s. JP Duminy was pretty graceful in admitting the India spinners had South Africa’s batsmen in all sorts of trouble. That they were not picking their wrong’uns, that the India spinners bowled the optimum pace, and that their lengths kept denying them the single down the ground, that batsmen are forced to take risks against them, and then they lose wickets. As Kohli said, this kind of spin dominance in tandem has perhaps never been seen in South Africa before.