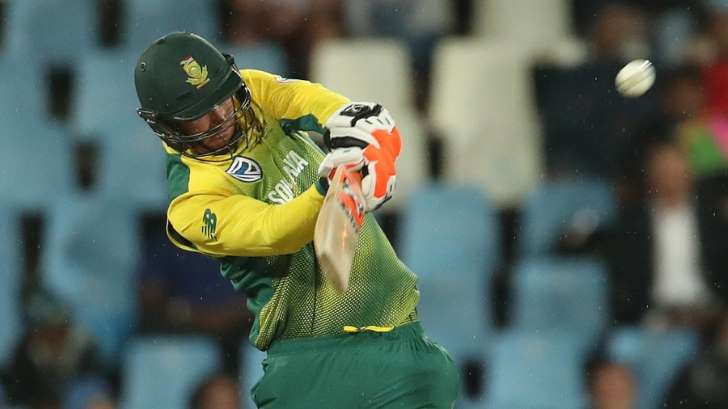 While much else has gone against them through the limited-overs leg of this tussle against India, rain has been South Africa’s friend, and Heinrich Klaasen a rare bright spark in a struggling batting line-up. Their only win of the ODI series featured rain and a destructiveinnings from Klaasen, and on Wednesday in Centurion, both ingredients were present in a series-levelling six-wicket win in the second T20I.

Klaasen smacked 69 off 30 balls to give a chase of 189 the impetus it needed, and JP Duminy batted through to the end to finish unbeaten on 64 off 40, ending the game with a pair of sixes off Jaydev Unadkat in the 19th over of the innings.

Rain wasn’t necessarily a help to South Africa in the ODI win in Johannesburg – 202 in 28 overs was surely a more difficult chase than 290 in 50 – but it dulled the threat of India’s wristspinners; Yuzvendra Chahal and Kuldeep Yadav struggled to grip an often wet ball and went for a combined 119 in 11.3 overs. Now Chahal, playing as the lone specialist spinner, endured another difficult night, going for 64 – the most by an India bowler in a T20I – in his four overs.

A steady drizzle backdropped the early part of South Africa’s chase of 189. It never grew heavy enough to halt play, but it was persistent, and ensured Duckworth-Lewis calculations were always at the back of both teams’ minds. This was probably what prompted South Africa to promote Klaasen to No. 4, sending him in at a time when they needed 151 in 90 balls.

South Africa were also nine runs behind the Duckworth-Lewis par score at that stage, for two wickets down, and Klaasen swiftly began to rectify that situation, pulling Unadkat for two sixes in the sixth over, and launching Chahal for another over long-on in the eighth over. That took care of the par score, and staying in touch with it meant South Africa’s chase was also on track.

At the end of the 10th over, South Africa’s run rate was just under nine an over, and their required rate just over ten. Klaasen brought the two numbers into close proximity off the first ball of the eleventh over, lofting Chahal over extra-cover for six, and followed up three balls later with the shot of the match, a switch-hit six over point. By that stage Klaasen had hit five sixes and just one four.

Worse was to follow for Chahal; his third over went for 23, with Klaasen hitting him for 6, 6 and 4 and then turning the strike over to Duminy, who promptly slog-swept him for another six. Klaasen fell at the start of the next over, swinging too early at an Unadkat offcutter to edge behind, and David Miller followed in the next over, miscuing a short ball from Hardik Pandya, giving India the glimpse of a way back into the game. They didn’t grab it, however, missing two chances in the 16th over, bowled by Chahal; MS Dhoni missed a leg-side stumping to reprieve Duminy on 40, and then Chahal himself dropped a return catch to let off Farhaan Behardien.

As they did in the first T20I, India batted with a sense of abandon not usually seen in their T20 game after being sent in to bat. They began with a maiden, but that had more to do with Chris Morris’ new-ball swing than with Shikhar Dhawan’s intent – he swung rustically at a couple of balls in that scoreless first over. Junior Dala took out Rohit Sharma with his first ball, an inducker, but thereafter the runs began to flow, with South Africa’s quicks once again lapsing into bowling too short and Dhawan and Suresh Raina cashing in. Twenty came off the third over, Morris’ second, before Dhawan picked out mid-on off a full-toss from Duminy in the fifth over. Then Dala’s extra bounce sent Virat Kohli back for a rare low score, in an over that ended up as a wicket-maiden, and India were 45 for 3 after six.

Raina and Manish Pandey rebuilt slowly at first, not finding the boundary once in the first 19 balls of their partnership, before Pandey’s leg-side hitting earned 19 off Tabraiz Shamsi in the 10th over. Raina’s dismissal in the 11th brought Dhoni to the crease, and he showed his intentions quite early, stepping out and hitting JJ Smuts for a straIght six off only the seventh ball he faced. Dhoni and Pandey would go on to add an unbroken 98 off 56 balls, 55 of those runs coming off the last five overs of India’s innings.

South Africa fed Pandey’s naturally bottom-handed game with bowling that was often too short or too straight, and his eventual 48-ball 79 not out would contain 55 leg-side runs and only 24 through the off side. Dhoni clattered three fours and two sixes in the last two overs, the pick of them a flat, back-foot slap over the cover boundary off Dane Paterson, to finish with 52 not out off 28 balls. It was only his second T20I half-century, in his 88th match, and on another day could have ended up winning India the match.