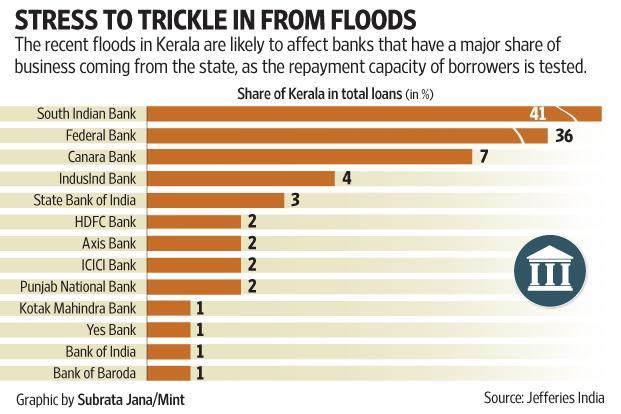 The tattered balance sheets of Indian banks appear poised to take another blow, after heavy rains unleashed destruction across the state of Kerala. Given the damage to crops, property and other assets that are typically collateral for loans, will banks take another severe hit on their already-battered asset quality? Repayment delays, restructuring and calls for moratorium are likely to impact profits of banks in the coming quarters, though the damage would be significant only for a few banks that have significant business in the state.

Kerala accounts for 36% of the total loan book of Federal Bank and 41% of South Indian Bank. The asset quality of these two banks is likely to take a significant hit.

For other banks, the hit would be felt on loans to agriculture and small businesses as these dominate the outstanding advances to the state, data from the Reserve Bank of India shows.

Farm loans account for 24% of the total advances to the state followed by loans to micro, small and medium enterprises, which have a 16% share. These loans were so far among the better performing ones in the loan book.

Analysts at Jefferies India Pvt. Ltd estimate that banks will have to restructure a large portion of their loans to the state and hence provisioning requirements will increase in the coming quarters. In the June quarter itself, 17 out of the 39 listed banks had reported a loss due to provisioning towards bad loans. The pressure on earnings has increased further now.

But analysts are estimating the impact on asset quality to be limited to the few banks having significant business in the state. That is because Kerala contributes just 3% to the overall loan book of the banking system.

“It is likely to take at least another three months post this event before each bank can give us a proper indication of the underlying impact of the crisis. Kerala is a unique state as agriculture loans have a high share of gold loans as collateral,” said Kotak Securities Ltd in a note.