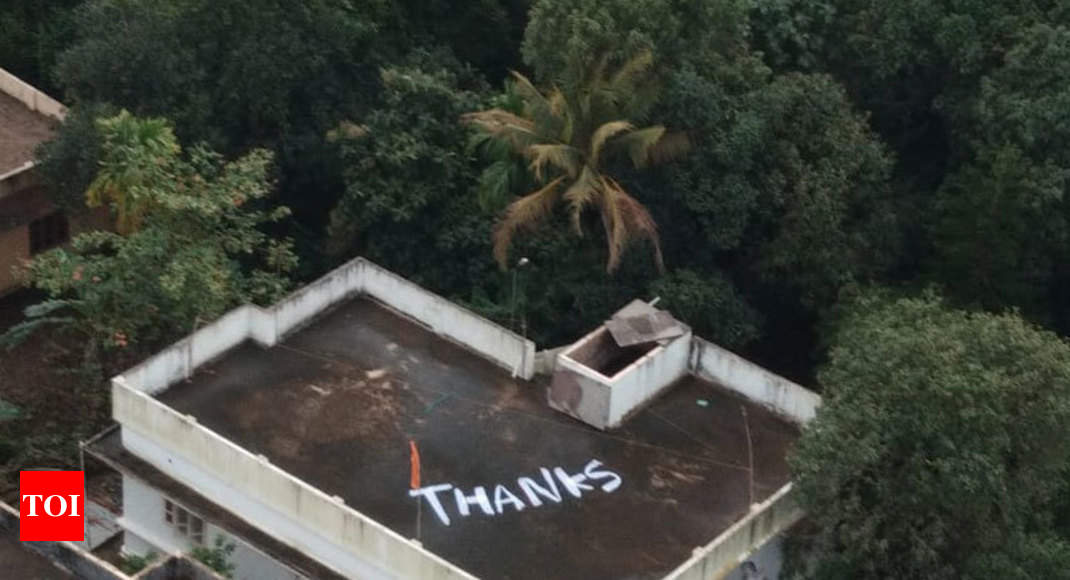 THIRUVANANTHAPURAM: ‘THANKS’, read the simple message in huge font in white paint on the terrace of a home, encapsulating sentiments of grateful Keralites rescued by defence personnel after raging floods left them marooned.

This note on the mossy roof of a two-storeyed building at Paravoor near Kochi can be read by personnel from helicopters engaged in rescue operations.

Incidentally, this was the very same house from which two nervous women were dramatically winched up to safety by a brave Navy commando when torrential rains lashed Kerala three days ago.

Commodore Vijay Varma, who piloted the Naval ALH, had rescued the two women when they got stuck in the marooned house on August 17.

The Indian Navy has posted a number of photos of this gesture of gratitude in their twitter handle along with the note: “#OpMadad #KeralaFloodRelief #KeralaFloods2018 A Thank You note painted on the roof of a house where the Naval ALH piloted by Cdr Vijay Varma rescued two women. Bravo.”

#OpMadad #KeralaFloodRelief #KeralaFloods2018 A Thank You note painted on the roof of a house where the Naval ALH p… https://t.co/FgSOirWHNo

Varma had also airlifted a woman in labour last week and rushed her to the Navy hospital, where she later delivered a baby boy.

“This was a very challenging task. We got an SOS and we traced them out…There is tremendous satisfaction, both professionally and personally,” the officer had said later.

Personnel of the Army, Navy, Air Force and NDRF are continuing rescue operations, braving difficult conditions in Kerala, where the deadly monsoon has so far claimed 216 lives and displaced more than seven lakh people.

A pregnant lady with water bag leaking has been airlifted and evacuated to Sanjivani. Doctor was lowered to asses… https://t.co/OhyRJz4cTN

A large number of stranded people, ranging from tiny tots to a 100-year-old woman, were airlifted and rescued by defence personnel from various isolated houses and buildings in the last few days.

Taking huge risks, the personnel had even landed the choppers on rooftops to rescue people.