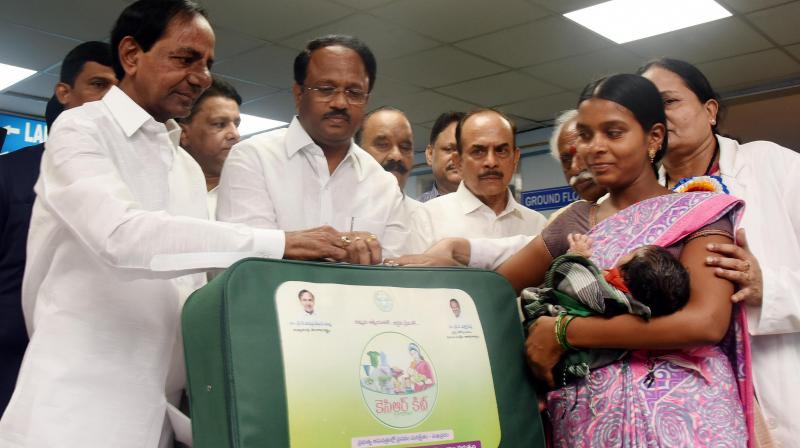 Hyderabad: More than 5,000 auxiliary nurse midwives tracking pregnant women, childbirth and immunisation schedules in Telangana have not been paid their dues by the Telangana government for last four years.

These ANMs are now assisting in the KCR kit scheme and claim that they are the backbone of the system but are not being regularised or given their dues.

There are 4,268 ANMs and 738 European ANMs who are employed under the National Health Mission to work towards ensuring safe childbirth in institutions to bring down maternal and infant mortality rates.

They were employed by the central government on contract basis and 50 per cent of the salary was given by the centre and remaining 50 percent by the state.

G Madhavi Latha, state coordinator for ANM’s explained “We are working for the last 11 years as the ground workers for mother and child health. But even after four years the state government has not paid us our salary on time.

“The state government officials state that our role in the state system is not defined. But when it comes to doing work for the KCR kits, we are being used. We track the pregnant mothers, submit documents online, get them registered and follow up with them. The big number of KCR kits that the government talks about every now and then is the result of our groundwork. But when it comes to giving us our dues and regularising us, they are not willing to commit.”

In a meeting on Tuesday morning, the ANMs stated that 15 members have died, their dues were still pending and the government was not releasing them. They have approached the health department and also had a meeting with Dr Laxma Reddy, but there have been only assurances but no action, alleged the angry women in the meeting.

With ANMs now being asked to opt for a midwifery course, the existing ones were not willing to take it up till the government settled all the pending dues.
Ms Latha explained, “We have the experience on the ground. We were a part of the World Health Organisation programme and later worked for various schemes under the National Health Mission. We are now promoting the KCR kits. We are open to further training but only if the government regularises us and clears our dues.”