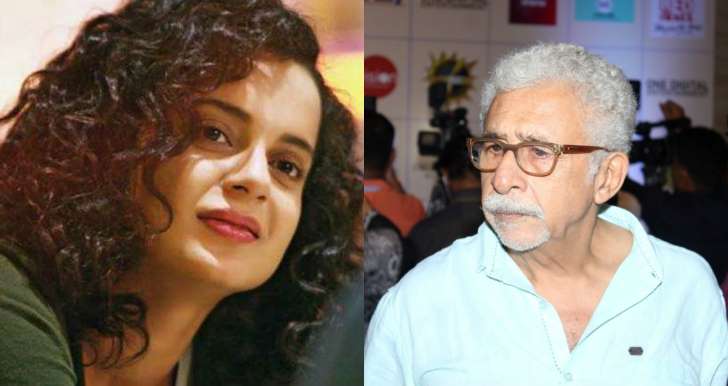 Bollywood actress Kangana Ranaut has never shied away from speaking her mind and hence, the diva found herself in the center of controversies several times in the past. The best examples are her fearless comments on nepotism in Bollywood and Aap Ki Adalat interview that ruffled many feathers in the industry.

Recently, the Manikarnika actress appeared on Film Companion’s Tapecast and again raised eyebrows with her remarks. But this time she was not alone, veteran actor Naseeruddin Shah joined hands with Kangana to criticize Bollywood.

When asked about what they dislike about the industry, both the actors went on a tirade against how Bollywood filmmakers are remaking films and not bringing any originality in movies. Naseeruddin even said that he finds the filmmakers have become lazy.

Here are the excerpts from the show:

“If you would’ve asked me what I like my answer would be briefer. No I love the Hindi film industry. It caters to millions and millions of viewers every day and entertains them with the most mindless content. It’s serving a very useful function. It’s deadening minds which is very necessary. It’s lowering tastes which is again very necessary. We have plagiarists who are acclaimed as great writers which is a very good thing. We have not only scripts which are borrowed from Hollywood, but we have also the poster album. There’s a guy that comes up with an album of Hollywood posters and says we’ll do this from this one and this from this one.

It’s herd mentality but it’s also a complete indolence and laziness you know in my opinion. How many filmmakers in Bombay bother to produce something original? Remaking this and that, at least now they’re admitting that we are remaking something. Earlier, they would be remaking it and not admitting it. I mean Deewar is nothing but a remake of Ganga Jamuna. Shaan is a remake of Sholay and so on and so forth. Now at least they are saying, we are remaking movies which shouldn’t have been made in the first place.”

“What I don’t like about Hindi films is that if something works, everyone does it. I have had big studios come to me and narrate Queen’s script. They just narrated my own film to me. They want to make the same thing again. I’m like are you guys realising this is the same film.”