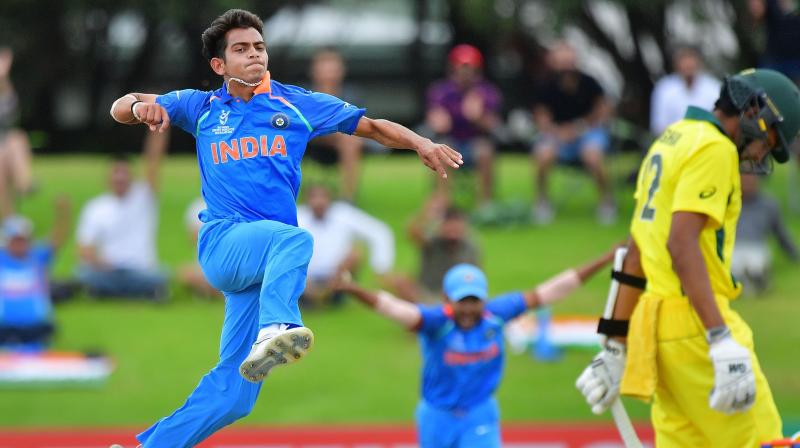 India Under-19 scripted history recently, when they lifted the Under-19 World Cup in New Zealand for the fourth time. Shubman Gill was the star for the colts in the tournament, as he was adjudged as man of the series for his solid performance with the bat. Anukul Roy was the top wicket taker, but Rajasthan pacer Kamlesh Nagarkoti grabbed eyeballs  with his express pace during the event.

The right arm pacer was instrumental in India’s success as the boys in blue remained unbeaten throughout the tournament as they outplayed their opponents from the first match till the end.

Nagarkoti, who played under Prithvi Shaw and coached by the legendary Rahul Dravid, alongside fellow paceman Shivan Mavi  proved handy for other teams throughout the tournament.

Nagarkoti with his express pace consistently troubled batsmen as he clocked more than 140 kmph. Speaking to Mumbai Mirror, the 18-year-old pacer, gave an insight on how coach Dravid did not let them indulge their adventurous side.

He along with fellow pacer Shivam Mavi and opening batsman Manjot  Kalra were giving an interview atop a mountain in Queenstown and were tempted to indulge in “adventure activities there”, but the coach did not allow that.

“He said the tournament was going on, and there was no point in taking any risk,” said Nagarkoti. “He would allow us to do a few things here and there, but we had to be back in our hotel by a certain time.”

When asked if he ever thought about breaking the curfew set by coach, he replied  “Actually we were a bit scared of sir. And we thought we should not break the curfew, so we never did it. Honestly, we didn’t. Well, we did think about it a few times but then we reasoned that ‘nahi yaar, sir would have had something in mind when putting a curfew in place, so let’s follow it’, adding that he hopes to take a late night stroll in Australia sometime in the future.”

The player also revealed that his first autograph was of Rahul Dravid when the team was together for the Asia Cup.

Nagarkoti was recently signed by Indian Premier League side Kolkata Knight Riders in the 2018 players auction. The youngster along with other teammates is excited to be part of the cash-rich league, where these youngsters will rub shoulders with some of the big names in world cricket.

“Manjot (Delhi Daredevils) was telling me ki bachke rehna, maarunga mere saamne aayega toh (Beware I will hit you when you come on to bowl at me). All of us have played against each other a lot and know each other’s games,” he said.