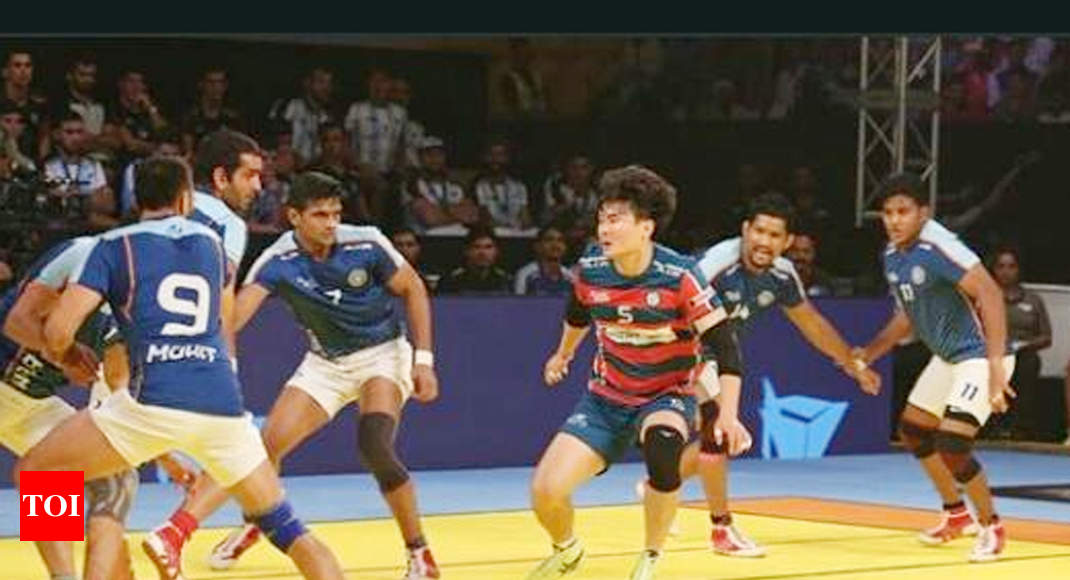 DUBAI: World champions India held their nerves under pressure to prevail over Korea 36-20 and set up a summit clash against Iran in the six-nation Kabaddi Masters on Friday.

India captain Ajay Thakur with 10 raid points outscored his counterpart Jang Kun Lee (8) with superb on-court skills and fine strategy to inspire India to a sixth win over their rivals from seven exchanges.

India have not lost to Korea since their nail-biting defeat in a league match of their triumphant campaign in the 2016 World Cup.

Iran put up a superlative show to annihilate Pakistan 40-21 in the first semi-final at the Al-Wasl Sport Complex as it would be a repeat of 2016 World Cup final here tomorrow with world champions India facing the runners-up.

Trailing 3-7 inside 10 minutes, India clawed their way into the lead and coach Srinivas Reddy decision to bring on Monu Goyat in place of Narwal paid off.

Goyat combined well with Thakur as India made up for he lost grounds by inflicting an all-out just before the half-time to snatch a 13-8 lead.

But with Lee in ominous form, Korean shoulders did not drop and kept the game alive with just a 17-10 lead in favour of the Indians at the break.

After the changeover, Girish Ernak stunned everyone when he singlehandedly pulled Lee back from an advanced position to give a nine-point cushion.

India followed it up with an all-out with a superb dash from Surjeet to inflict an all-out that stretched their lead to 24-11.

India started the second half strongly as their defence led by Girish Ernak was in fine form. An all out was inflicted in the 24th minute as India led 25-11.

Rishank Devadiga made a two-point raid to give India 26-11 lead while Thakur scored a raid point to make it 30-17.

In the last five minutes, India took their foot off the pedal but ran out comfortable winners with the score 36-20 in their favour.

Facing a partisan crowd with Pakistani fans shouting ‘Iran, Iran, India got off to a slow and watchful start.

Korean on the other hand were aggressive from the start with captain Lee leading from the front with a super raid that handed them the early advantage.

Reddy preferred an experienced Narwal over Rohit Kumar to add a left raider to the team a move that did not work well.

Mohammed Nabibaksh also contributed in the raiding department for Iran who also put up a strong show in the defence and did not allow any space and time to Pakistan’s raiders.

Such was their defence that Pakistan could not even force an all out despite Iran down to two men for almost four minutes as Korea had a healthy 19-9 lead at the break.

The six-nation invitational tournament, organised by International Kabaddi Federation in association with Star Sports and Dubai Sports Council, is the last tournament before the Asian Games.