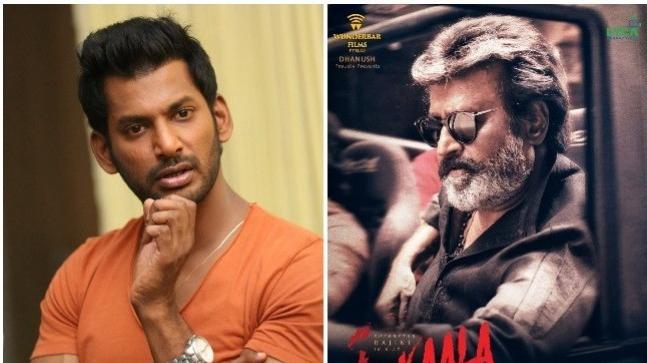 Director Pa Ranjith’s second film with Rajinikanth, Kaala is all set for a worldwide release on June 7. However, the film has been banned in Karanataka because of Rajinikanth’s stance on the Cauvery dispute.

On May 30, Rajinikanth said that South Indian Film Chamber of Commerce should intervene in this issue and solve them. Later, actor Vishal, president of Tamil Nadu Film Producers Council (TFPC), stated that Kaala’s release shouldn’t be stopped in Karnataka because of his political stance.

Talking to the press, Vishal said, ” We’ve spoken with Karnataka Film Chamber and they’re expected to announce their decision tomorrow morning. Cinema and politics are different. Kaala is a film that is produced by Dhanush in which Rajinikanth has acted. His political remarks shouldn’t be associated with films.”

He further added, “I don’t know what decision Karnataka Film Chamber would take. But, we are planning to meet the state’s CM HD Kumaraswamy regarding this issue. We want Rajinikanth’s Kaala to release across the globe without any hassles.”

Rajinikanth will be seen as a gangster in this commercial film with political elements. Pa Ranjith revealed that the film would talk about inequality and indigenous land laws.