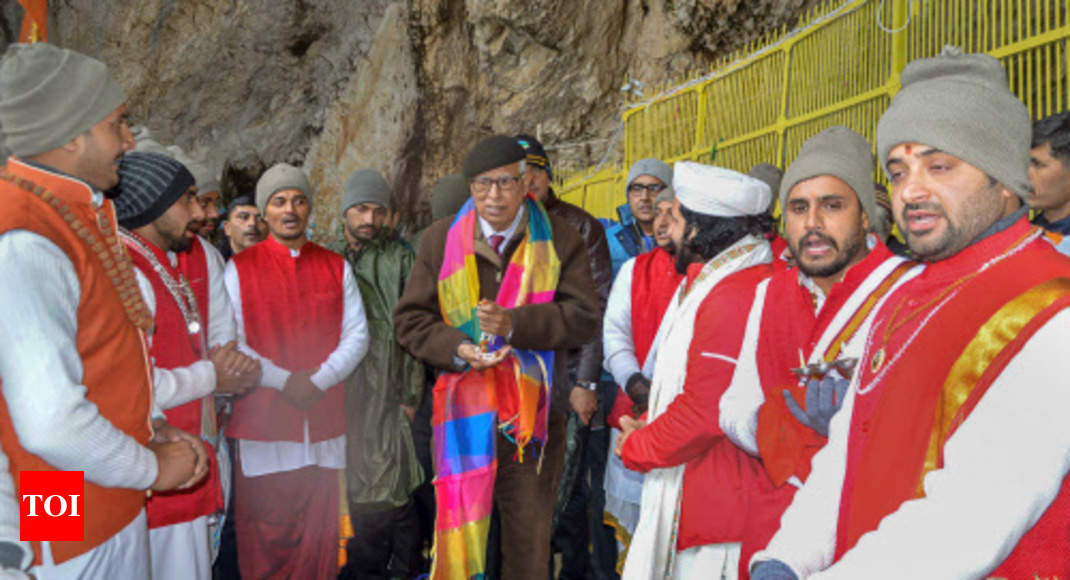 SRINAGAR: Two weeks after he took over the reins in Jammu and Kashmir, Governor N N Vohra’s official Twitter handle has got several complaints of alleged corruption and other wrongdoings against the previous PDP-BJP coalition government headed by Mehbooba Mufti.
The Twitter handle was set up on June 19, the day Mufti submitted her resignation as chief minister of the state after the BJP pulled out of the government.

The Governor, through Twitter, has been receiving complaints about issues which were considered dead and buried.

The complaints received via the Twitter handle @jandkgovernor range from Mufti removing the director of super-speciality SKIMS hospital and nominating in-service professors as members of the governing council to former speaker and BJP leader Kavinder Gupta’s doctor allegedly getting appointed through the backdoor.

“Ex-CM Sahiba (Mehbooba)ruined SKIMS & violated all norms by nominating inservice professors (friends of Dr Manzoor rather) as GB (governing body) members, then victimised all who raised voice – prof ahangar suspended as Director, my resignation was forced, promotion of 4 others stopped,” Altaf G Haji, an Onco surgeon tweeted to Vohra.

Another Twitter user brought to Governor’s notice the allegations made by a sitting PDP MLA, who had recently revolted against Mufti, about the wrongdoings committed by Para.

“A quota of 250 seats were given to Waheed-ur-Rehman Parra and he adjusted his nears and dears in JK Bank, JKP, Youth Service and Sports and other departments, Ansari alleged. We request Governor for an immediate inquiry commision,” Syed Ishfaq wrote.

Pawan Sharma brought to Vohra’s notice the appointment of Charu Gupta, daughter of Kavinder Gupta as Dental Surgeon, under the National health Mission.

“No notification, special(ly) crafted posted filled with blink and here general public has to hustle till they get broke to get a single job(.) hope u’ll open this case,” Sharma said while referring to the appointment.

Vohra’s office, through the official Twitter handle, informed all these complainants that a report has been sought from the departments concerned.

A Twitter user from Jammu asked the Governor to start registering the Rohingya refugees in the state in view of national security.

“Sir, please register Rohingya’s in Jammu region as they do it in west for the security of their nation. Issue them temporary refugee cards so that their activities are monitored.. otherwise, they will just indulge in anti-India activities. It’s high time now,” wrote Pratiba Koul.

Another user brought to Vohra’s notice the images of Amarnath pilgrims making a line to answer the call of nature on the banks of Dal Lake while heading towards the Baltal base camp.

The photographs went viral on social media here and many netizens called for making the pilgrims aware about the need to protect the environment before they embark on a pilgrimage.

A Twitter user sought Governor’s help in getting the horticulture department and other agencies concerned to address the “Alternaria Leaf blotch”- a fungal disease- affecting the orchards in Anantnag district.

Vohra’s attention was also drawn towards an alleged incident of mass felling of Walnut trees, an offence if done without permission from the authorities concerned, in Budgam district and the “plight of the Bemina area” in terms of development, despite being less than 10 kilometres from the Civil Secretariat — the seat of state government.

In these cases also, the Governor’s office informed the complainants that a written report has been sought from the departments concerned.

While some observers feel that the citizens have more faith in Governor’s rule than an elected government, many are cynical about the outcome of reaching directly to the Raj Bhavan with complaints.

“Let us see what action the Governor takes on these complaints … How many wrong decisions he is able reverse, especially in case of backdoor appointments. Otherwise, we have seen these accountability exercises in the past as well but no action has ever been taken,” Shahid Ahmad, a Srinagar resident, said.