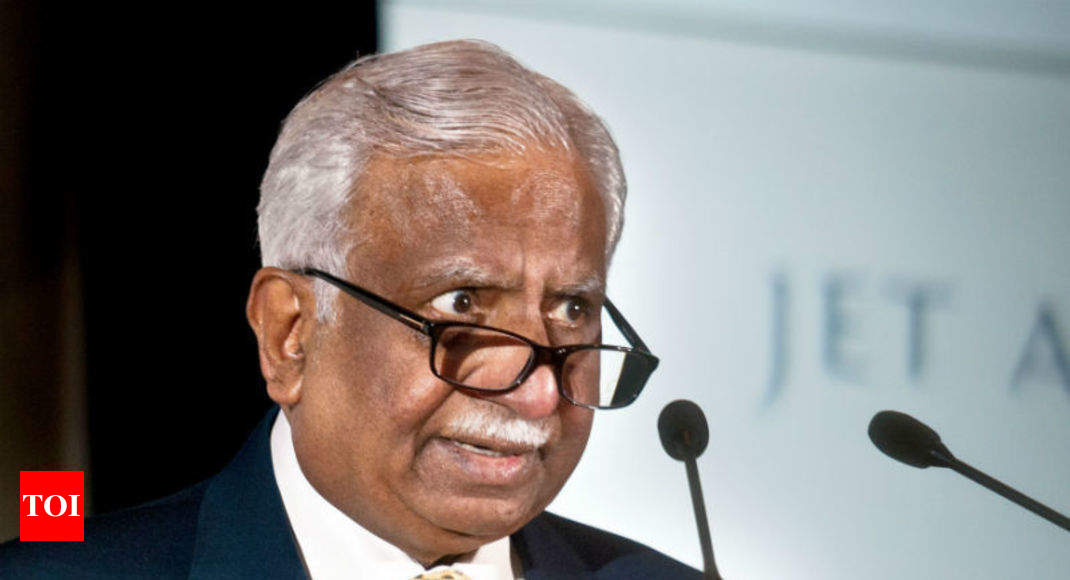 MUMBAI: Under fire from regulators and employees for the financial woes engulfing the airline, Jet Airways chairman Naresh Goyal met aviation secretary RN Choubey yesterday in the capital and apprised him of the ongoing crisis.

Goyal, the London-based NRI, had last week told his shareholders that he’s embarrassed and guilty of their losses, later left for London amidst the airlines’ plans to raise funds to come out of the financial airpocket, sources said.

Following its abrupt move to indefinitely defer June quarter earnings announcement on August 9, the aviation ministry had said it was keeping a watch on the developments at the beleaguered airline.

“We will be watching the developments at Jet Airways,” Choubey had said.

He was soon to say that the airline did not approach the ministry as it was not bound to do so. “But when airlines are in difficulty, they come to us,” he had said.

When contacted the airline confirmed the meeting and also that he left on an overseas business trip.

“The chairman has met the aviation secretary on Monday to discuss the issues concerning the sector and the airline,” an airline spokesperson told PTI.

On his foreign trip in the middle of a deepening financial and regulatory crisis, the spokesperson said, “he continues with his routine engagements including travels as part of his scheduled itinerary and business requirements.”

The airline which has debt of over Rs 11,000 crore from banks, had said last evening that it was looking at all options to raise funds.

“We have been evaluating various funding options to meet the liquidity requirements on priority,” the airline had said in a statement to PTI after stock exchanges sought clarification.

Beginning early this month, the 25-year-old airline has been facing cash crunch leading it to force senior management to take a 25 per cent pay cut and proposing an up to 25 per cent reduction in the wages of other employees, including engineers and pilots.

However, after protests by these categories of employees the airline was forced to put the move on hold.

Responding to shareholders’ queries on pay cuts at the AGM, chief executive Vinay Dube had said that the carrier was working very diligently and implementing for some time a mission plan that looked at every element of structuring from cost perspective, including the payrolls.

“We are looking at all multiple elements of restructuring and payroll is one of them,” Dube had said indicating that the pay cut proposal was not shelved.

It can be noted that the financial crisis has come to haunt the airline once again after a gap of five years which saw Goyal offloading 24 per cent of his holding to Etihad for over Rs 2,069 crore in April 2013.

The crisis has led to the airline losing nearly three-fourths of its market value with the shares plunging to multi-year lows. Today despite a market rally, the Jet counter closed down over 1.12 per cent to Rs 283.30 on the BSE, down from an YTD of high of Rs 883.65, pulling down its market cap to a paltry Rs 3,218.29 crore.