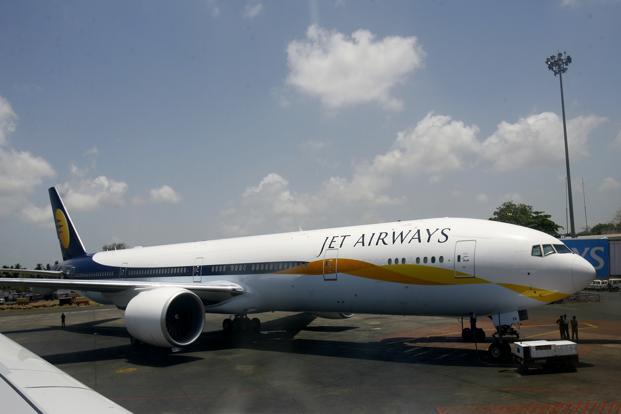 Jet Airways will report its earnings on 10 August. According to three Bloomberg analysts poll, the company may post a loss of Rs 572.70 crore. Photo: AFP

Mumbai: Shares of Jet Airways India Ltd, India’s second-largest airline by passengers carried, on Friday slumped as much as 5.7% after Mint reported that the company is left with revenue to run the airline for just 60 days. Jet Airways shares fell as much as 5.74% in intraday trade to Rs 312.25 per share on BSE. At 10.45am, the stock was trading at Rs 316.70, down 4.4% from previous close. Since start of January till date, Jet Airways shares declined over 61%.

Shares of rivals SpiceJet and Indigo fell nearly 1% each. So far this year, both stocks declined 34% and 20%, respectively.

Jet Airways management conveyed its staff that it is forced to take the extreme step (of salary cut) as the airline is in bad financial shape, and company is left with revenue to run the airline for just 60 days, the report added.

Mint on 4 August reported that the company has approached investment bankers again to help sell a stake in the carrier. The fundraising is crucial for the airline, owned 24% by Etihad Airways PJSC of Abu Dhabi, as it faces several challenges including a surge in fuel prices, weaker rupee and intensifying competition.

Analysts said that costlier crude oil and weakening rupee pushes down profitability of aviation companies. So far this year, crude oil has gained 10% while for 2016 and 2017, it has risen 53% and 18% respectively. Year to date, the rupee has weakened nearly 7%.

“Sharp uptick in ATF prices (accounted for 40% of revenues) and INR depreciation (bulk of cost is USD denominated) will impact profitability given high price sensitivity of the Indian consumer leaving limited ability to pass on costs”, said Edelweiss Securities in a 30 July report.

Earlier nation’s most-valuable carrier, InterGlobe Aviation Ltd reported a 97% decline in its net profit to Rs 27.79 crore in June quarter from Rs 811.14 crore a year ago. This was the sharpest drop in profit since the carrier listed on the local stock exchanges in November 2015. Revenue rose 14.5% to ₹6,818.34 crore from a year earlier

Jet Airways will report its earnings on 10 August. According to three Bloomberg analysts poll, the company may post a loss of Rs 572.70 crore.