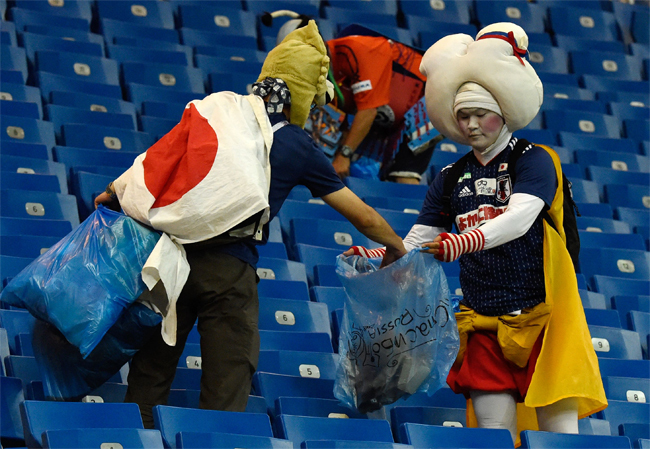 NEW DELHI: The FIFA World Cup 2018 Russia will be remembered for the classy Japanese footballers and their fans. Despite a heat-breaking loss to Belgium in the round of 16 on Monday night, the ‘Samurai Blue’ showed their gratitude after cleaning their dressing room and then leaving a thank you note for their hosts.

Journalist Tancredi Palmeri shared a picture of the Japanese dressing room on his Twitter account in which they also left a note in Russian saying ‘Spasibo’ – which translates to ‘Thank you’.

Amazing from Japan. This is how they left the changing room after losing v Belgium: cleaned it all. And in the midd… https://t.co/7ck1U9Nww2

Not only the footballers but their fans were also pictured cleaning the stands after the conclusion of the game.

This is not the first time that the Asian giants and their fans have put on display an example of their impeccable character. Earlier also, during the group stages, the Japanese fans were seen regularly cleaning the stands following their team’s matches.

This was despite a painful loss in which Japan had taken a 2-0 lead but ended up being on the losing side following an epic comeback by Belgium. Japan exited the competition after Nacer Chadli scored the winner in the injury time handing Belgium 3-2 win to progress to the quarterfinals where they will meet Brazil.

While there have been several moments of brilliance on and off the field in the ongoing FIFA World Cup, the pictures of Japanese footballers and fans cleaning up after themselves will certainly rank among the favourites.