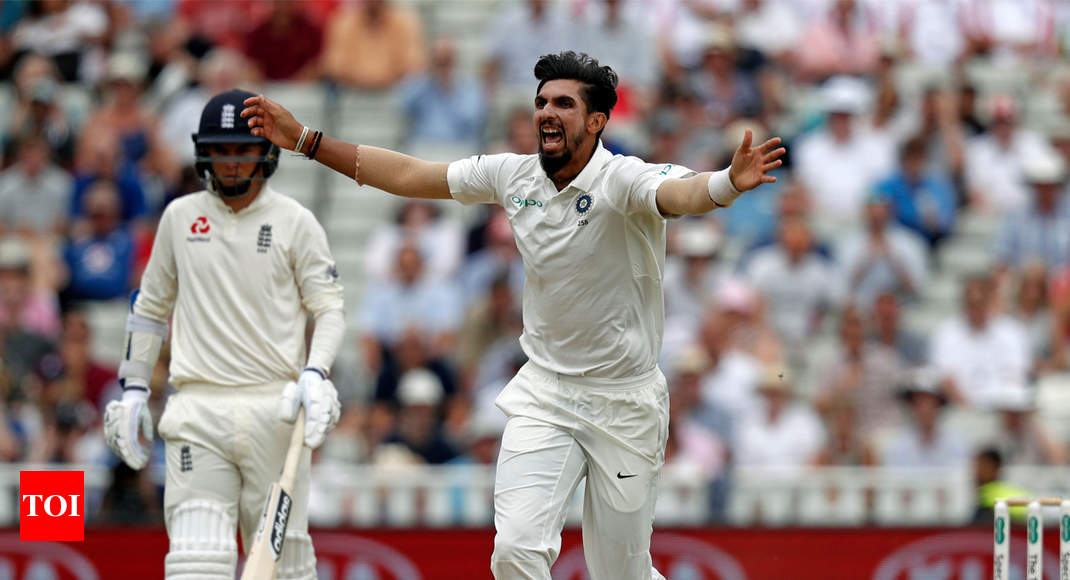 BIRMINGHAM: Back in the reckoning after registering his eighth five-wicket haul, Indian pacer Ishant Sharma says his impressive county stint with Sussex gave him the much-needed confidence and experience ahead of the current tour of England.

Ishant played four matches for Sussex in the County Championship Division Two earlier this year, scalping an impressive 15 wickets and even scoring a half-century.

Ishant (5/51) registered his second five-wicket haul on English soil on Friday to help India bowl out the hosts for 180 in the second innings, leaving the visitors to chase a 194-run target to win.

“Playing county cricket has helped me a lot. I was disappointed a bit (on missing out IPL) but I figured whatever happens it’s for your good. It was a good experience and I enjoyed it a lot. I played for Sussex and bowling with Duke’s ball was good,” Ishant told reporters at the post day’s press conference last night.

ALSO READ: Kohli can be India’s greatest of all time: Sangakkara

“The good thing was I had overs behind me. I played four matches for Sussex, and a few One-Day matches too, but I bowled nearly 250 overs in that.

“It feels nice to represent your country, come abroad and take five wickets in an innings, especially the second one. I bowl hard but my wickets’ column doesn’t (always) become bigger. It feels nice to work hard as a bowler,” he added.

Ishant bowled a sensational spell in the post lunch session and destroyed the English middle order. He changed angles to come round the wicket and most of the English left-handed batsmen found it difficult to handle his swing.

Asked about the ploy, Ishant said it was a pre-meditated plan.

“In the first innings, we wanted to take the ball away from the left-handers. I started over the stumps but when the ball started to do things I came around.

“Bowling coach told me to come around the stumps straightway. It becomes a difficult angle for the batsmen. When I start to swing the ball, it becomes very difficult for the left-handers,” he said.

For most of his career, Ishant has been labelled as a “defensive bowler”, but the experienced campaigner begs to differ.

“I don’t know where the label (of being a defensive bowler) came from. I try to bowl depending on the situation. I just go with my gut feel and situation of the game,” he said.

India finished day three at 110 for 5, still needing 84 runs for victory. Skipper Virat Kohli was unbeaten on 43 in the company of Dinesh Karthik (18).

Even though the visitors find themselves in a precarious spot, Ishant is confident of India’s win with Kohli still there at the crease.

“He (Kohli) is someone who always gives you positive energy and that is a big thing as captain. He always wants to do something special for Team India and everybody knows how professional he is,” he said.

“The good thing is that I have scored a 50 in county cricket, so I am carrying that confidence in my batting as well. Hopefully, they don’t need me, and Virat and DK will do the job.”

India were reduced to 78 for five at one stage, before Kohli and Karthik held fort until stumps to raise visions of victory.

“It gives us a lot of confidence because Virat has scored 150-odd in the last innings. DK got out cheaply in the first innings, but you can see that he has positive intent,” Ishant said.

“Losing five wickets doesn’t mean much because we got their batsmen out quickly as well. Cricket is such a game that you can chase down small totals easily with one big partnership.

“I think the tough period is gone. The wickets in England aren’t very helpful to be honest, and it is all down to sun god. If sun is out there is no problem. It is problematic only when it is cloudy and then swing starts,” he signed off.