Neeraj Chopra: India’s flag bearer at this Asian Games, Chopra has emerged as the country’s best athlete on the international stage after the exit of long jumper Anju Bobby George. The Haryana javelin thrower, who is already among the best in the world, won his first big gold at the Commonwealth Games in Gold Coast. In Jakarta, he will face serious challenge from the Chinese and South Koreans.

Women’s 4x400m relay: The Indian women’s 4x400m relay team has been on a roll over the last three editions. After winning the gold in 2006 in Doha, the Indian quartet repeated the feat in Guangzhou and completed a fine hat-trick four years later in Incheon. They would be looking at yet another golden run; anchoring their laps to glory would be new star, 400m junior world champion Hima Das.

Dutee Chand: The Odisha athlete, the fastest Indian woman, has come a long way since failing a gender test. The ace sprinter will be hoping to break new ground at the Asiad as she attempts to win medals in the women’s 100m and 200m events in which Indians have struggled to make the podium. The last medal in 100m – no Indian has won a gold – came through PT Usha in 1986.

Muhammed Anas Yahiya: The Kerala athlete has been chasing Milkha Singh’s shadow for quite some time now. At the Commonwealth Games in April, he became the first since the ‘Flying Sikh’ to enter the finals of men’s 400m. Anas ended fourth, setting a new national record of 45.31s. Last month, he bettered his mark to 45.24 in Czech Republic. Anas is sure to figure in the final in Jakata and if everything comes together, he can emulate Milkha who won in Tokyo 1958 and Jakarta 1962, and Ajmer Singh who won gold in 1966.

Seema Punia: Despite adding to her impressive collection year after year, Seema Punia, for critics, is still ‘tainted’ by the same old brush. Four years back she was the most sought after athlete at the Incheon media centre after winning the gold in women’s discus throw. Ahead of the CWG, there were complaints about her training stint in Russia and she responded by winning the silver medal. The 35-year-old would be looking to end on a high. 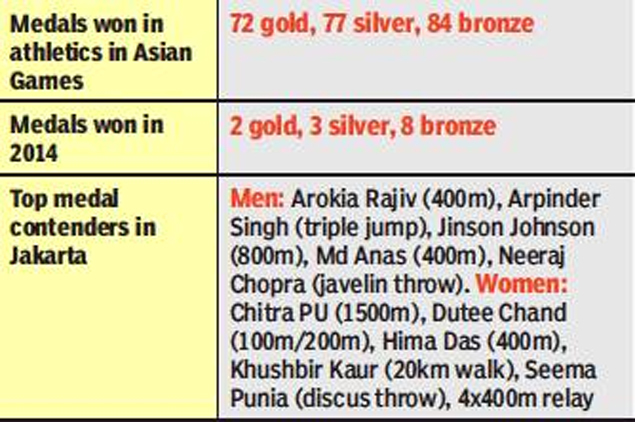 Compound events: For a change, the compound archers will carry India’s medal hopes more than the recurve ones who have always hogged the limelight for being an Olympic event. However, the elimination of compound individual events in this Asian Games is a huge setback. India will fancy their chances in the compound mixed team event which has been introduced for the first time in this Games. Abhishek Verma and his partner Jyothi Surekha have bagged bronze medals in all the four World Cup legs this year and thus will start as favourites. The women’s compound team of Jyoti, Trisha Deb, Muskan Kirar and Madhumita Kumari will go to Jakarta as the World No. 1 team. They will look to improve upon their bronze-medal winning show of last Games. Rajat Chauhan, Verma, Aman Saini and Sangampreet Singh Bisla look good to repeat the team gold they won four years ago.

Recurve events: Both the men’s and women’s sides lack experienced hands and have to depend on raw talents of Pramila Daimary, Ankita Bhakatalong with Laxmirani Majhi in the women’s event and Sukhchain Singh, Vishwas Kumar and Jagdish Chaudhary in the men’s event. India’s highest ranked archer, Deepika Kumari (No. 7), had struck gold after six years in July at the World Cup Stage 3 in Salt Lake City. But the strong South Korean side had skipped that event. The men’s challenge will depend on Olympian Atanu Das. 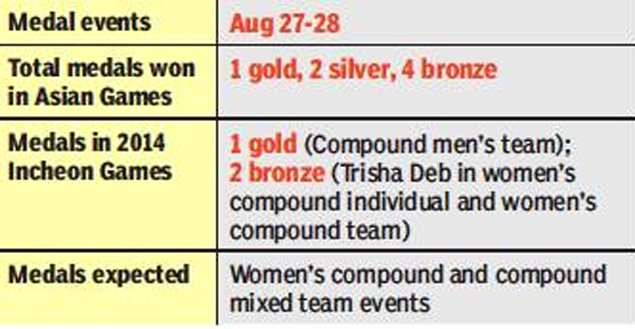