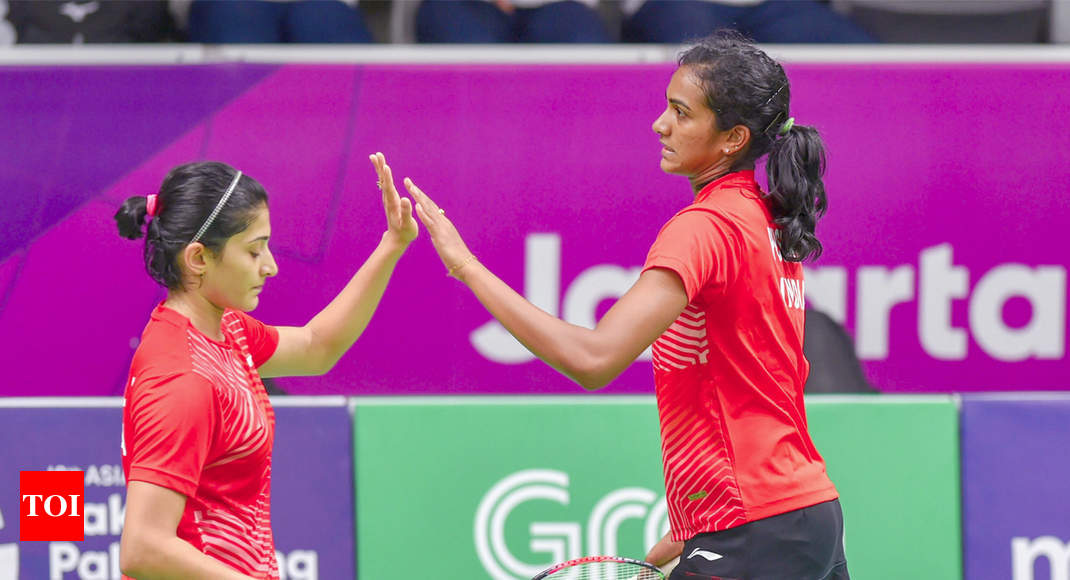 JAKARTA: India’s hopes of winning a medal in badminton team events at the 18th Asian Games went up in smoke after both the men’s and women’s sides bowed out of the competition following an identical 1-3 loss in the quarterfinals on Monday.

Olympic silver medallist PV Sindhu and HS Prannoy shone bright but India couldn’t get enough support from the rest of the shuttlers as they lost to Japan and Indonesia in the women’s and men’s team events respectively.

After the women’s team went down 1-3 to top seeds Japan earlier in the day, the men’s team put up a spirited effort before losing 1-3 to hosts Indonesia.

Commonwealth Games silver medallist pair of Satwiksairaj Rankireddy and Chirag Shetty then put up a gallant fight before going down 21-19 19-21 16-21 to world no 1 combination of Kevin Sanjaya Sukamuljo and Marcus Fernaldi Gideon.

World no 11 Prannoy then brought some cheers back in the Indian camp by reducing the deficit with a 21-15 19-21 21-19 win over Jonathan Christie in the third match.

But national champions Manu Attri and B Sumeeth Reddy lost 14-21 18-21 to world no 9 Fajar Alfian and Muhammad Rian Ardianto as the men’s team crashed out of the contest.

Earlier in the day, the Indian women’s team, which won a historic bronze in the last edition in Incheon, also lost in the quarterfinals to top seeds Japan.

It was always going to be a close affair between Sindhu and world no 2 Akane Yamaguchi but the Indian prevailed in the tight opening singles encounter 21-18 21-19.

Sindhu, who took 41 minutes to put India ahead, had also beaten Yamaguchi at the recent World Championship on way to the final.

N Sikki Reddy and Arathi Sunil then struggled to contain unforced errors and lost tamely 15-21 6-21 to Yuki Fukushima and Sayaka Hirota, allowing the Japanese to level the tie.

In the crucial second women’s singles, Saina Nehwal made a dramatic comeback from nowhere and saved four match points in the second game to take the match into the decider, but she eventually lost 11-21 25-23 16-21 after battling for one hour and 11 minutes against Nozomi Okuhara.

Saina initially struggled to contain her unforced errors while Okuhara was disciplined. The Indian hit almost everything either over the line or on to the net but made a stunning comeback in the second game.

She, though, could not take advantage of the momentum and lost five points in a row from 16-16 in the decider to lose the match.

In the must-win fourth rubber, Sindhu paired up with Ashwini Ponappa but the duo lost 13-21 12-21 to reigning Olympic champions Misaki Matsutomo and Ayaka Takahashi, who were solid with their defense.

“It was a tough draw facing Japan in the first match. I was keen to give India a good start from my side. The doubles players also did well but the Japanese played very tactical game. Saina also gave her 100 per cent, it was 16-16 in the third set and few points made the difference,” Sindhu told PTI.

“Somewhere down the line, the Japanese (Miaki and Ayaka) played with good strategy. They compelled us to make mistakes. The top 10 teams in the world are of same standard. We can’t say they are tough or easy, though, each player is different.”

Ponappa said Sindhu was the best option to pair up with even though they don’t play together regularly.

“Sindhu was my pick. She is strong and hard smasher. We were confident of pulling off a win. We had played against Thailand in the Uber Cup and had won the decider,” she said.

Asked what made the difference despite having one of the top singles players by her side, Ponappa said, “It was defense”.

“The defence in the singles and doubles is different. They played very smart. They had studied our game and played with good strategy. Also, the Japanese and Indonesians are very good with their defence.”