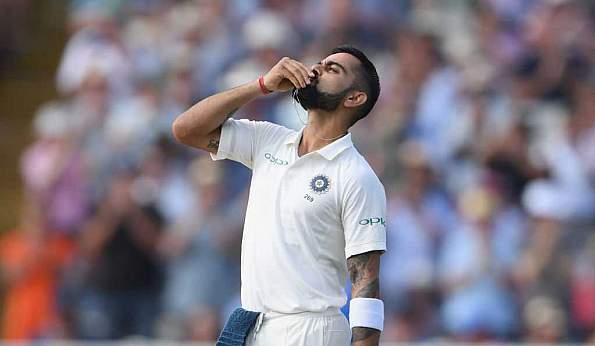 India has tilted the pendulum back, walking away with enough momentum to boast. England has been battered mentally; after holding the aces for the first half of the day, they’ve miraculously managed to throw it away. Ashwin has managed to hold on to Cook’s number, finding out ways that keep getting more beautiful to the eye. But the day goes to Kohli, to his single-handed masterclass that’s kept India in the game. Sure, Malan dropping him didn’t help England either. Now when you take how things turned out of the equation and look at this position in isolation, things are pretty even. 287 looked under-par, but given the help, England extracted out of this surface, it opens up a whole new dimension in this game.

Before, Kholi walked out to a loud ring of boos from the Hollies stand just beside the press box. The Eric Hollies stand, renowned for a convivial atmosphere and colorful characters, wasn’t going to let Virat Kohli get away with the mic-drop just like that.

He walked out to cloudy skies. Murali Vijay and Shikhar Dhawan had made good use of a bright, sunny morning. But now, the weather was cooler and the cloud cover meant there was more swing on offer.
He walked out with India in trouble. They had lost Murali Vijay and KL Rahul in the space of three balls and were in desperate need of a partnership. He would soon lose his partner Shikhar Dhawan. He walked out to meet an overjoyed England team, now, with their tails up. Anderson, his old nemesis in 2014, was waiting in anticipation. The odds were all against Kohli. But this was exactly the sort of situation in which he would thrive.
And thrive he did.
Kohli is like the kid in front of a candy shop. He wants that large, delicious red one called ‘Challenge’. When the chance arrives, he is ready for it. The England challenge has always been around him. Even as he scored tons of runs elsewhere, there was always talk of whether Kohli, who failed the last time India played Tests here, will succeed against Anderson and Co. On Thursday, Kohli showed that he not only had the will to succeed, but he’d out in oodles of application and upgraded his skills to ensure he does.
Kohli came into the wicket just as India wasted a solid start by losing two wickets in three balls. Immediately, it became evident that he had arrived with a strong game plan. The leaves were a strong part of his early game. Kohli had to face Sam Curran, who had taken three wickets, and James Anderson, who had his number in 2014, and he did so with respect. Off the 21 balls he faced off the seamers before Lunch was taken, Kohli left alone as many as 10. There were a few edges in between, but Kohli, by not fishing outside off, had ensured that only the unplayable deliveries get him.
Soon after lunch, Kohli was presented with his most testing phase. Anderson came back refreshed from the interval and had a prolonged go at Kohli. Anderson and Stokes bowled superbly in tandem and they kept both Kohli and Rahane honest. While Rahane eventually took the bait and wafted outside off, Kohli’s temperament was like a monk who’d seen all the riches of the world and just wanted to attain world peace.
Anderson bowled 26 successive balls at Kohli without conceding a run, and Kohli left alone more than half of those. Leaving Anderson can be extremely tricky, for he swings the ball both ways and sticks to an almost impeccable line just outside off. But Kohli’s awareness of his off stump and judgment of what Anderson was trying was brilliant. Despite Kohli’s gameplan, Anderson had him nicking towards the slips twice, with one falling short and one being dropped by Malan.
He used the drive only once during those four overs, refusing to be sucked into the shot that can get him nicking off. He missed two deliveries, but it was down to two only because of the 14 he chose not to play at.
Attacking cricket comes naturally to Kohli and it would have been almost second nature for him to try and break the shackles by countering Anderson. The Indian captain, however, knew what was at stake and kept a tight vigil.
Once he had gotten through that spell, Kohli knew his hard work was done. The ball was still moving around and in Stokes, Anderson, and Curran, England had three bowlers who were constantly threatening, but Kohli’s confidence had gotten to the next level.
“He loves these kinds of challenges,” Harbhajan Singh said on air. “When nobody else is going, he loves to put his hand up and say I will do it. When he got into the squad, he was the one guy, nobody could pick Ajantha Mendis. VVS, Rahul, all the greats were struggling. He said I want to go out there and change the game. If the challenge gets bigger, Kohli gets bigger. And this is another big performance.”
It already was by then. Kohli had shown the rest of the batting order that with some application and execution – and luck of course – there were runs for the taking. Soon, the innings was punctuated with some signature Kohli shots.
By the time Anderson’s spell ended, Kohli had played just three drives and one flick overall – at that time he was 21 of 55. Now, they started to feature with more regularity. Off his next 109 balls, which were all to the seamers, Kohli scored 75 runs, and the ground opened up a lot more to him. There were 19 drives, 21 flicks to the leg side, four pulls or hooks, and five dabs towards the third man. Not all of them brought him runs, but they were all with the intention to score. The leaves and the defense were still intact, but Kohli knew he had to cash in on his early hard work.
And cash in he did. With the most spectacular hundred.
But for all the accolades his performance on Day two at Edgbaston will bring him, the work behind the hundred needs more applause. For this will not only show the others on the team that a tough bowling attack can be tackled, it will also promote everyone to put in the hard yards to do so.
He may have walked out to a ring of boos, but everyone, including the England team and the ones in the Hollies stand, were applauding Virat Kohli as he walked off out for 149. It takes a genius to be able to turn a group vying for your blood to stand up and clap for you. And in Edgbaston, Kohli proved that he is not far from just that.