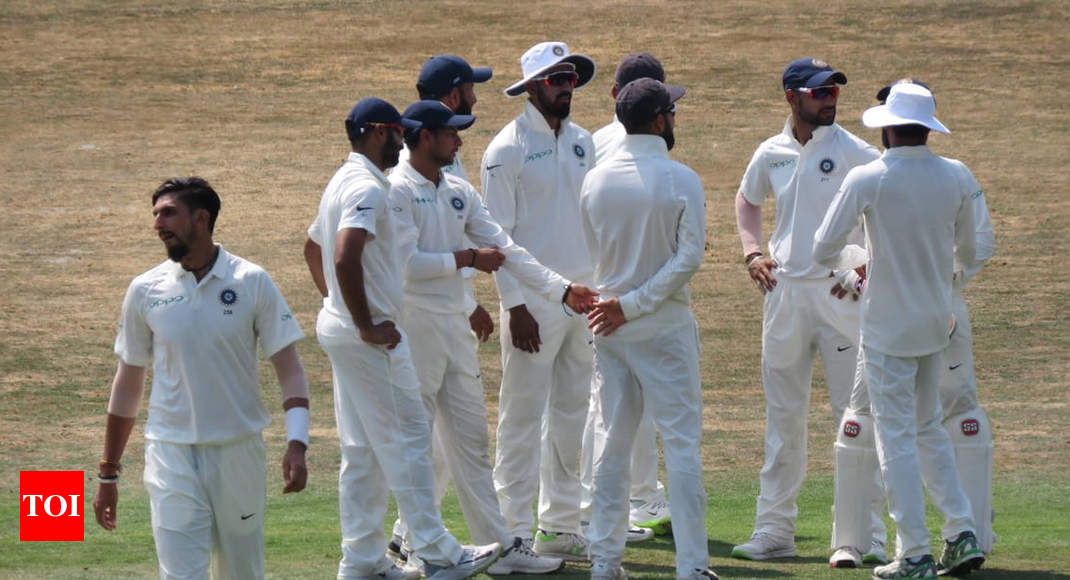 CHELMSFORD: India failed to bowl out county side Essex in 94 overs before Shikhar Dhawan and Cheteshwar Pujara suffered another batting failure on the final day of the one-off practice game, leaving the visitors with plenty to ponder ahead of the first Test.

Essex, resuming day three at 237 for five, went on to frustrate the Indians for 36 overs before declaring at 359 for eight, 36 short of the visitors’ effort in the first innings.

The play on the final day was called off one and a half hours before the scheduled 6pm local time due to rain, with India reaching 89 for two in 21.2 overs. The game ended rather abruptly, thanks to the first spell of rain in Chelmsford in two months.

The away team would have been heading to Birmingham, the venue of the first Test, in a much better space if two of its key batsmen Shikhar Dhawan and Cheteshwar Pujara had gotten some runs under their belt. However, it was not to be as Dhawan departed without scoring for the second time in the match while Pujara perished after scoring 23 off 35 balls.

KL Rahul, who was among the runs in the first innings alongside skipper Virat Kohli, Dinesh Karthik, Murali Vijay and Hardik Pandya, was sent out to open on Friday alongside the struggling Dhawan.

The stylish right-hander made a strong case for selection in the series opener with an unbeaten 36 off 64 balls, following his 58 in the first innings.

It remains to be seen whether the team management sticks to the left-right combination of Dhawan and Vijay or brings in Rahul at the top. Pujara is also not a certain starter and if he is overlooked, Rahul can also bat at his number three position.

After the bowlers were made to work hard by Essex, India got off to another poor start in their second innings, with Dhawan bowled for a three-ball duck in the second over. He was unable to comprehend Matt Quinn’s (1-5) swing and fell for a pair in this game having faced only four balls.

Pujara improved on his first innings’ showing before falling to Paul Walter. Looking comfortable to a great extent, Pujara put on 36 runs for the second wicket with Rahul (who was dropped on 8 at second slip).

But just when he was beginning to drop anchor, a low catch ended his stay at the crease with Varun Chopra making no mistake at short mid-wicket.

Needing some batting time under his belt, Ajinkya Rahane then walked to the crease and saw India safely to tea. Afterwards though, it was surprising to see Rahul still walk out to bat, as Karun Nair (who scored 4 in the first innings) could have done with another hit in the middle.

Perhaps the biggest news of the day, however, came in the pre-lunch session when R Ashwin (0-21) bowled five overs. He overcame the minor finger injury sustained in the nets on Thursday and took the field for the first time in three days, much to the relief of the team management.

Ashwin bowled with decent control on a slow wicket not yet affording turn and looked the best out of three spinners on display. Kuldeep Yadav (0-24) had also bowled in the morning session, his first outing in this game as well.

But Walter (75 runs, 123 balls, 13 fours, 1 six) got stuck into him, hitting three fours and a six in two overs, as he attacked the wrist spinner. It was surprising that the spinners bowled only 11 out of 94 overs India sent down in the Essex innings with Ravindra Jadeja (0-17) not bowling on the final day.

Indian pacers had a good workout on day three as well, with Hardik Pandya (0-54) and Ishant Sharma (3-59) sharing the second new ball. The latter struggled to find his line for the second day running, while Shardul Thakur (1-58) put in some vital horse work.

Mohammed Shami (0-68) generated enough momentum to get into reckoning, should India choose to go in with only two full-time pacers in the first Test, given how Pandya bowled well enough in both innings.

As such, the stand out bowler for India in this game was Umesh Yadav who took 4-35 in 18 overs and always found enough movement to trouble the Essex batsmen. He has made a stern case to be included for the Birmingham Test, but there are far more important questions regarding the batting order and spin combination to be answered.