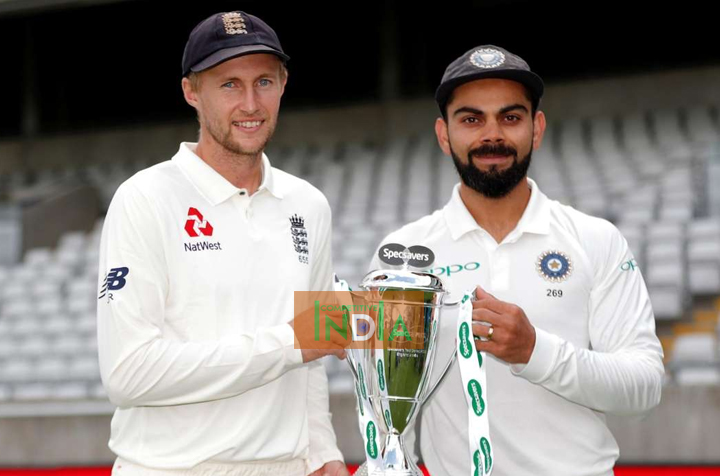 Ashwin (4/60) registered his best figures in Test cricket across South Africa, England and Australia as the hosts lost six wickets for 69 runs in the third session of Day 1.

England was on course for a substantial first-innings total while Root (80) and his fellow Yorkshireman Bairstow (70) were sharing a fourth-wicket stand of 104 in only 23 overs. But just as the hosts threatened to dominate their 1,000th Test, Root was cut off in his prime – run out, once more short of a 14th Test century which has eluded him for the past year.

Ravi Ashwin finished with four for 60 as England folded to an underwhelming 285 for nine at stumps.

England would have been all out, in fact, had a tough caught-behind chance been held when Sam Curran edged Mohammad Shami’s penultimate ball of day one.

For his trouble, the first of three wickets to fall for eight runs from 216 for three, Root’s misfortune was accompanied by a full-house ‘send-off’ from his opposite number Virat Kohli.

It was the India captain who produced the brilliant piece of fielding, with a direct-hit throw on the turn after Bairstow called an ambitious two barely to the edge of the square at midwicket.

Indian Cricket team is on a three-month tour of England. After losing the ODI series by 2-1, India is now playing against England in the first Test match at Edgbaston in Birmingham. As of Day 1, England has scored 289 runs and lost 9 wickets. India is yet to bat. However, Day 2 of Ind vs Eng first Test match starts at 3.30PM IST today and promises to be a thrilling encounter with Indian batting lineup in action against the England bowlers and conditions. This match is being live-streamed in India via mobile apps like Sony Liv, JioTV, and Airtel TV.

For those who wish to watch India vs England first Test match live online, they can watch a live stream of channels like Sony Ten 3 (Hindi) and Sony Six (English) on their mobile phones. Here is our quick reminder of the top live streaming options to consider for IND vs ENG 1st Test match.