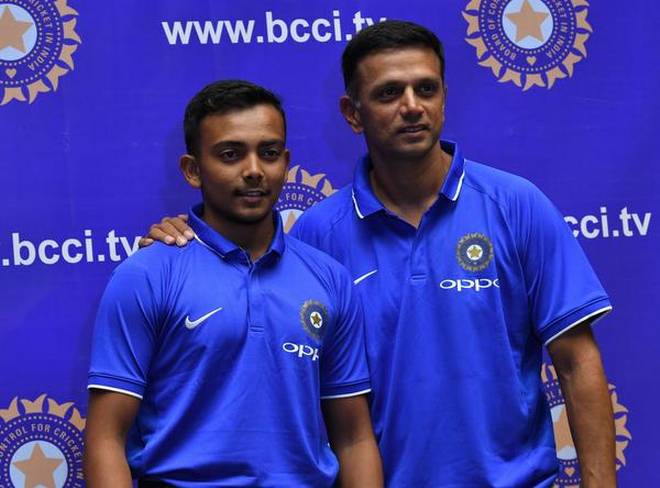 Optimism mingled with an eagerness to know what lies ahead as India’s potential future stars geared up to lock horns with Australia in their big- ticket campaign opener of the ICC U-19 World Cup in Mount Maunganui on Sunday.

Coached by the distinguished Rahul Dravid, there is no dearth of talent in the sqaud, and the former India captain’s sprightly boys would have got acclimatised to the conditions by now having arrived many days prior to the start of the tournament.

India are three-time champions, the last triumph coming in 2014.

While Dravid, who has been at the helm of U-19 and India A squad for some time, may not like to focus on individuals, it is very difficult to not see the likes of skipper Prithvi Shaw as the a vital cog in the team’s batting wheel.

Alongside Shaw, who has created ripples with his exploits in the domestic circuit for Mumbai, there is Himanshu Rana, who has also amased plenty of runs in Youth ODIs.

Punjab’s Shubhman Gill at number three is one of the most exciting young batsmen going around, and with a few impressive first-class games this Ranji Trophy season, he will have gained in confidence.

The top-order’s performance is likely to be crucial to India’s chances in the tournament. The middle-order is likely to be manned by Anukul Roy and Abhishek Sharma, and they would certainly want to make heir presence felt.

Another exciting name doing the rounds is Bengal pacer Ishan Porel. With Mohammed Shami rarely turning up for his state team owing to national commitments, Porel has caught the eye in the limited opportunities that came his way.

Porel is set to spearhead the pace attack and he could be complemented by Shivam Mavi, who will be aided by the seaming conditions in this part of the world.

Mavi attracted the attention of the selectors after his performance in the zonal level ‘Challengers’ tournament where he bagged nine wickets in four matches.

Shaw said he is happy with the team’s preparations. “We’ve been here a week now, played a couple of games. Everything has gone well, the preparation of the team has been good. Our goal is obviously to win the World Cup but at the same time we are looking forward to our first game,” he said.

Asked if there are any Indian players in particular he thinks could have a lot of success at this tournament, Dravid said, We don’t like to focus too much on the individuals. We believe we’ve got a very good squad together and the opportunities for us to play well as a team are there.

“We’ve been playing some very good cricket of late, so rather than focusing on individuals and naming a few people, at this age we really believe that every one of these kids is talented.

In the last edition of the tournament in 2016, India finished runner-up after losing to the West Indies in the final.

Like his counterpart from India, Australia captain Jason Sangha has also made a mark in the domestic scene and adding to the tournament flavor will be the son of Steve Waugh, Austin. Cricket Australia CEO James Sutherland’s son Will is also in the national squad.