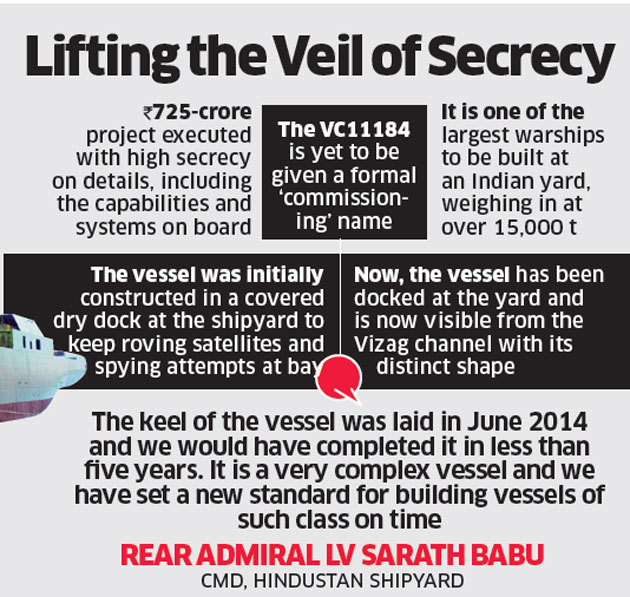 NEW DELHI: India’s secretive nuclear missile tracking ship, which will become part of an elaborate missile shield being planned against attacks is successfully undergoing harbour trials and is set to be delivered by December, a top official in charge of the project has confirmed. The VC11184, a specialised Ocean Surveillance Ship being built for the National Technical Research Organisation (NTRO), is on its way to completion just over four years after it was ordered as part of the Modi government’s focus on creating a nuclear missile shield for the nation.

The next step will include sea trials by a joint team of the Indian Navy and the NTRO in which its specialised surveillance systems – three dome shaped antennas packed with sensors – will be extensively tested before the handing over. “We have as of now finished the basin trials. There were done alongside and were successful.

We expect to deliver the ship by December this year,” Rear Admiral LV Sarath Babu, Chairman & Managing Director of Hindustan Shipyard Limited told ET. The complex vessel, which will generate over 14 MW of power just to power up its tracking radars, will have multiple roles for India – from tracking enemy missiles to accurately giving data on tests that are routinely carried out of indigenous strategic missiles.

“The keel of the vessel was laid in June 2014 and we would have completed it in less than five years. It is a very complex vessel and we have set a new standard for building vessels of such class on time,” Rear Admiral Babu said. The 15000-tonne class vessel was initially constructed in a covered dry dock at the shipyard – the country’s largest -to keep roving satellites and spying attempts at bay. However, for the past several months, the vessel has been docked alongside and is now visible from the Vizag channel with its distinct shape. A large globe shaped radar placed on the aft gives it distinctive visibility.

The Rs 725 crore project is a showcase under the Make in India initiative, with high secrecy being maintained on details, including the capabilities and systems on board. The VC11184, which has not been given a formal ‘commissioning’ name yet, is one of the largest warships to be built at an Indian yard, weighing in at over 15,000 tonnes.