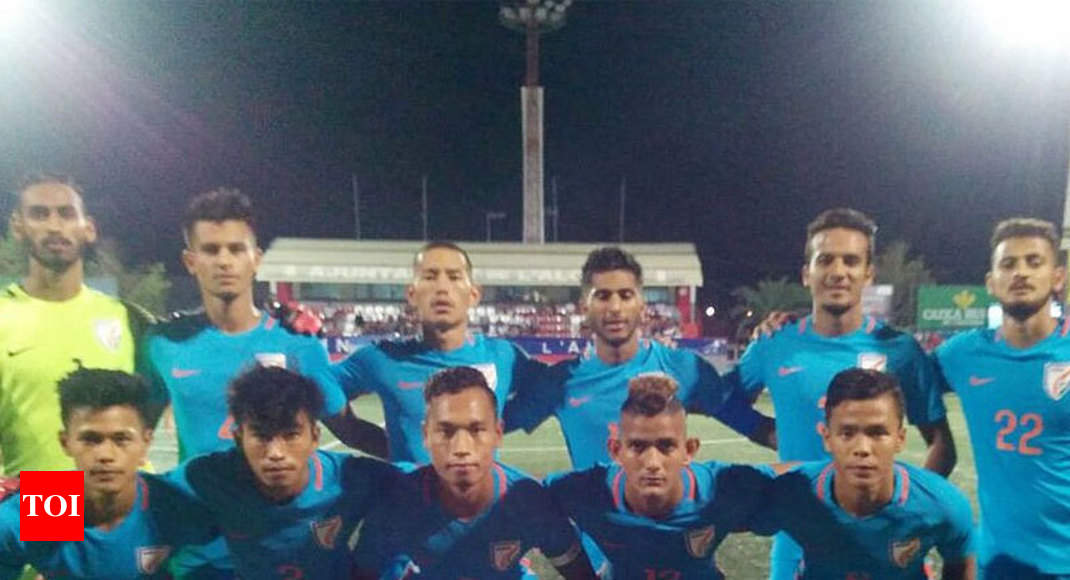 VALENCIA: India notched up one of its most memorable football triumphs when the country’s under-20 team stunned traditional giants Argentina 2-1 despite being reduced to 10 men in a pulsating contest at the COTIF Cup.

Deepak Tangri (4th minute) and Deepak Tangri(68′) were the stars for the Indian U-20 team on Sunday night as the Floyd Pinto-coached side scripted a historic result against the six-time U-20 world champions, coached by 2006 World Cupper Lionel Scaloni and former mid-field star Pablo Aimar.

It was a massive boost for Pinto’s side, which had lost 0-2 to Murcia before going down 0-3 to Mauritania. They were held to a goalless draw by Venezuela in their previous match in the tournament.

“This victory will definitely earn Indian Football more respect in the world of football. It opens up a window of opportunity to test ourselves against the best in the World on a regular basis,” Pinto said after the match.

“It’s unbelievable! I am a very proud Indian today. This win is a testament to the efforts and belief of the All India Football Federation in moving forward towards developing the youth of the country.

“We have a renewed belief that with the right support & exposure we are capable to compete with the best teams in the world,” he added.

Tangri gave India a perfect start as he headed the ball at the back of the net from a corner taken by Ninthoiganba Meetei in the fourth minute.

Boosted by the early goal, India stepped up the attack and tried to create chances in the first half.

Suresh Singh Wangjam and Boris Singh Thangjam tried to feed Aniket Jadhav with the ball but on two occasions he was adjudged off-side as after the first half, India lead 1-0.

In the second half, Ali squandered an opportunity after he received a pass from captain Amarjit Singh Kiyam but his shot was saved by the Argentine goalkeeper.

India U-20 side was soon reduced to 10 men after forward Jadhav was shown the red card in the 54th minute for a bad foul.

With Argentina trying to make inroads, India goalkeeper Prabhsukhan Gill pulled off a couple of brilliant saves in the 56th minute and another with his fingertips in the 61st minute.

India continued to look for another goal and a brilliantly struck free-kick taken by Anwar Ali in the 68th gave the Asian side a 2-0 lead.

It was a foul on substitute Rahim Ali which resulted in the set-piece and Ali’s shot hit inside of the woodwork before nestling in the Argentine goal.

Four minutes later, Argentina pulled one back but the Indian colts held their nerves in the remaining minutes to create history on Spanish soil.

“The one thing missing from our continued development through this tournament were goals. I am really happy the boys adapted so quickly and effectively to the changes we made post our first gamer. I just couldn’t have asked for a better reaction,” the India coach said.

“The bench was understandably ecstatic yet calm as there was a lot of football yet to be played. Deepak Tangri’s goal was one of a sheer determination while Anwar Ali’s free-kick was of the highest order. We wanted to put in a performance that would make people forget about our previous game against Venezuela U-20 and the boys managed to do that.”

Interestingly, this win comes weeks after national coach Stephen Constantine criticised the Indian team’s performance at the U-17 World Cup, describing it mediocre and the hype surrounding as unjustified.

The Indian team was also not allowed to participate in the Asian Games after being denied clearance by the Indian Olympic Association (IOA).