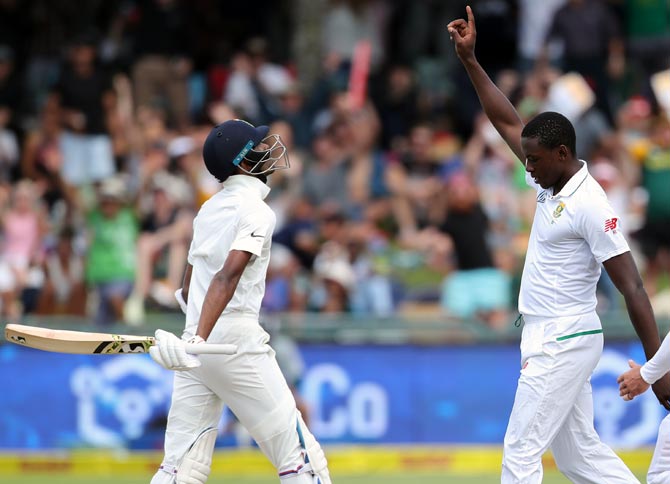 If a face told you the story of India’s Test, it was Hardik Pandya’s. When he sprung up after getting hit in the midriff while batting in the first innings, he was defiant even though in pain. When in the field, he was all enthusiasm, telling his “bhai log” [brothers] to finish it off before lunch. When he had ball in hand, he was full of hope every ball. Even when they sent him to deep midwicket, he kept shouting to Mohammed Shami at fine leg.

When the camera panned to the India viewing area late on the fourth afternoon, though, it captured heart-breaking pictures of Pandya, sitting for the first time perhaps without any animation on his face. He was crestfallen, almost too shocked at India’s fourth-innings collapse to react. The dream was already over. India had lost six or seven cheap wickets. The look on that face was not just of disappointment; it was of having come close, having smelled it.

In his mind, playing outside Asia for the first time, Pandya had done enough to give India a fighting chance at a most glorious Test win. There was real hope as India walked off for lunch, having bowled excellently on the fourth morning, taking the eight remaining South African wickets for 65. There were about two bad balls in the whole session, and even they conceded only one run thanks to good fielding. The bowlers showed tremendous improvement from their first-innings effort when the seamers apart from Bhuvneshwar Kumar were off their mark.

“We rectified the errors we made in the first innings by letting them off after having them 12 for 3,” a disappointed Virat Kohli said after the Test. “We plugged that gap pretty nicely in the morning today. Getting them out, 208 felt chaseable, felt very realistic, but again we needed someone to go out there and get 75 or 80 and not 20-25-30 runs. We wanted one big partnership to get the job done, which we failed to do, and again we lost four wickets in four overs.”

However, India need to warn themselves against looking at it this as a very close result, and pinning it on the fourth-innings failure. India got the best of the conditions in the match. They bowled – it was South Africa’s choosing – on day one when the pitch was fresh and seamed a lot, and was quicker than typical Newlands pitches, but still let South Africa get a partnership for almost every wicket after having them down at 12 for 3. There were half-volleys and leg-side offerings aplenty, and a dropped sitter in the slips.

India then got plum bowling conditions on the fourth morning again after the pitch had remained under covers for a whole day thanks to continuous rain, which resulted in moisture getting trapped. This time the bowlers made great use of the conditions, but for this comeback to be anything more than a moral victory India needed to have batted well in the first innings, for which they got the flattest conditions of the match on day two.

However, it was on the first evening that India failed to give themselves a chance. It was always going to be a difficult 50 minutes. The pressure from the four fast bowlers, who didn’t have much to lose and had their home crowd behind them, was going to be immense. India had nothing to gain from those 50 minutes but needed desperately to come out unscathed. The incentive was the next day when everybody expected the pitch to be good for batting.

That India lost three wickets can be accepted; you need really high skill and a bit of luck to survive this kind of pressure. How India lost them is what should rankle them. M Vijay played a loose drive, Shikhar Dhawan top-edged a pull that was not on, and Kohli meekly pushed at a short ball outside off. This was ill-disciplined batting. Kohli spoke a lot about intent at the end of it, but if anything there was too much intent in this period. “You can’t just stand there and take whatever is coming your way and not have intent at all,” Kohli said. “You might get out, but it’s important to keep coming at the bowler and making them feel that if you make an error I am going to score. So I think that message needs to go pretty strongly and you need to do that as a batting unit, collectively. I think Hardik [Pandya] did that really well in the first innings, R Ash[win] was really positive in the second innings, but if five-six of us can have that mindset, starting from the top, it will really create that sort of momentum for us as a batting unit, which I think we lacked in both the innings. A brilliant performance [Pandya’s] with the bat got us back into the game, otherwise we were pretty similar to the situation we were in the second innings. We definitely need batsmen to apply themselves and show more character.”

Pandya did show the intent required to put the bowlers off their plans, but we must not forget that he did so when the ball was old and soft. The importance of seeing off the new ball cannot be overstated. Cheteshwar Pujara might be well-advised to recognise his moment better and start showing more intent sooner, but surely it was the lack of the well-renowned Vijay restraint that hurt India more than Pujara’s lack of intent?

India’s batsmen usually get roasted when the bowling is at fault in overseas conditions. It is still partly true for this Test but only partly. It is easy to look at the most immediate thing when you are heartbroken, but the fact that India were playing catch-up through Pandya’s innings and then through that unbelievable session of bowling can only be traced back to the first day’s play, and to the selection meetings before that.